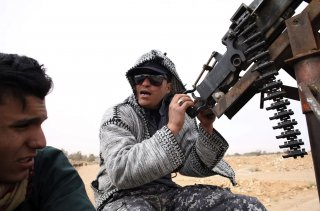 Egypt is preparing to deploy its army outside its borders for the first time in almost 30 years. At issue is Libya, where Turkey has intervened to support Prime Minister Fayez al-Sarraj, whose Tripoli-based government tilts to the Muslim Brotherhood if not even more virulent Islamist ideologies. Egypt has long supported Khalifa Haftar, a former Qaddafi-era general with subsequent American citizenship. In theory, Haftar is less tolerant of Islamism (reality is more complicated) but, regardless, he has failed to win widespread international support due to his erratic nature. The State Department, for example, believes Haftar is too willing to sell out to Moscow, while the Kremlin suspects at best Haftar is too autonomous and, at worst, would just as likely sell Russian patrons down the river as he would Americans.

Turkey’s intervention in Libya has been long and destabilizing. A loose end in the Benghazi tragedy investigation remains whether Turkey knew in advance of the attack on the U.S. consulate which led to the murder of U.S. Ambassador Chris Stevens; the Turkish ambassador had just met Stevens and drove out past the gathering Islamist mob but apparently did not forewarn Stevens or his security team.

While Turkish leader Recep Tayyip Erdoğan sympathized with Libya’s more radical Islamist factions, initially took a hands-off approach: Egyptians long considered Libya their own near-abroad, and Erdoğan was willing to defer Libya to Egypt so long as Mohamed Morsi, a Muslim Brotherhood acolyte, ruled in Cairo. With Abdel Fattah el-Sisi overthrew Morsi, Egypt transformed overnight in Erdoğan’s mind from ally to enemy. Nevertheless, Erdoğan remained more consumed by events in Syria than those 600 miles away across the Mediterranean.

Ideology guides Erdoğan’s foreign policy, but it is not its only pillar. Commerce matters too. Dozens of Turkish businessman accompany Erdoğan on overseas travel. He rewards those who toe his line. He invested more than a billion dollars during Morsi’s year-long tenure in both aid and business contracts, only to lose them upon Morsi’s ouster. The same pattern held true with Sudan.

As the Syrian conflict wound down, Erdoğan again turned his focus to Libya. Not only did Erdoğan see in Sarraj an ideological ally, but he also saw a means to win preferential access to Libya’s vast oil wealth, much of which lies outside Sarraj control.

Surreptitiously at first and then overtly, Turkey began intervening. In January 2018, Greek authorities seized a Tanzanian-flagged ship which apparently was carrying Turkish weaponry to Libya in violation of a UN arms embargo. That was the first in a series of weapons interceptions. By early 2019, Turkey was flying not only munitions, but also inserting extremists and veterans of the Syrian campaign into Libya. In April 2019, for example, Turkey returned Sami al-Saadi and Khalid al-Sharif, the deputy head of the Libyan Islamic Fighting Group, to the Misrata Airport in Libya. Later, a Turkish cargo plane flew 45 veterans of the Idlib campaign to Misrata. Turkey next began exporting drones, as Syrian fighters and veterans of the Islamic State continued to pour in with Turkey’s facilitation.

After Haftar’s forces marched on Tripoli, Turkey’s intervention became more pronounced. In November 2019, Erdoğan and Sarraj signed a deal delineating a maritime border between the two countries, a claim as illegal as China’s maritime-territory grabbing in the South China Sea. Sarraj and Erdoğan later agreed on a potential multibillion package for Turkey. In effect, Sarraj seeks to use Libyan oil and gas resources to pay Turkey to maintain him in power.

Loose weaponry in Libya is a problem that predates Turkey’s intervention, although the technology—drones, MRAPs, and missiles—which Turkey now provides an infusion that has given Sarraj’s forces a qualitative edge.

What makes Turkey’s actions in Libya more dangerous, however, is its use of proxies to fight on its behalf. Turkish-backed proxies in Syria are responsible for grave violations of human rights. While Turkish diplomats say they oppose the Islamic State, Turkey’s embrace of Islamic State veterans to fight on behalf of Turkey’s interests not only in Syria but also in Libya belie their claims.

Then, there is SADAT, an Islamist paramilitary company founded by Adnan Tanriverdi, Erdoğan’s former military advisor. SADAT has provided financial and military support U.S.-defined terror groups like Hamas. Whereas Turkey openly helps train Somali forces at its base in Mogadishu, SADAT reportedly has also extended offers to Somalis for further training and enlistment to more militant causes. Now, there are reports that Turkey and SADAT are sending Somali fighters into irregular groups in Libya. While the Somali foreign minister has denied those reports, his government’s own former intelligence chief has said that the Mogadishu government largely subsidized by Qatar, a country that supports and subsidizes Erdoğan’s Islamist campaigns.

This brings us back to Egypt’s looming entrance into Libya. Not only the U.S. government but also the broader international community is scrambling to head off Egypt’s intervention, a move which will destabilize an already volatile situation. Egypt’s track record is not good: Its intervention in Yemen was a disaster and, more recently, its record in the Arab-Israeli war far less to brag about than Egyptian military museums would suggest, and it has been unable to stamp out an insurgency in the northern Sinai peninsula. There simply is no guarantee that Egypt will be able to achieve its aims quickly and at a cost the Egyptian economy can easily bear.

But, the time to head off an Egyptian intervention was when Turkey began intervening in 2018. The threats posed to Egypt by the radicals Turkey now imports into Libya from Syria and Somalia pose a real threat to the Arab world’s largest state. Indeed, during both the Obama and Trump administrations, the chief U.S. counter-terrorism complaint has been that Egypt did not pull its regional weight and deploy forces outside its borders to aid the counter-terrorism fight.  Both administrations understood Cairo’s reluctance to involve itself in Yemen, but both Obama and Trump’s teams resented Egypt’s reluctance to aid more directly the counter-Islamic State coalition in Syria.

But Washington cannot have it both ways: After years of international inaction to counter Turkey’s growing terror sponsorship, Egypt is now stepping forward proactively and responsibly. Simply put, Egypt is correct to counter Turkey in Libya. Frankly, Turkey’s actions and its insertion of Syrian and perhaps Somali radicals into the Libyan theater leave it no choice. It is time for Washington either to reassert counter-terror leadership itself or to back allies who wish to do so.