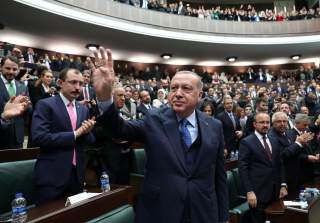 On December 18, 2018, customs authorities seized three thousand Turkish-made pistols in Khoms, a Libyan port about forty miles east of Tripoli. The shipment of which Turkish authorities pleaded ignorance, represented a clear violation of the UN arms embargo on Libya. At least one of the shipments was labeled on the Turkish manifest as foodstuffs. Soon after, Libyan port authorities seized upwards of four million bullets onboard a Turkish freighter. Brigadier General Ahmad al-Mismari, spokesman for the Libyan National Army, dismissed the joint investigation promised by the Turkish government and Fayez al-Sarraj, prime minister of Libya’s Government of National Accord, the pro-Islamist government. The Libyan National Army blamed the Turkish weapons shipments on an upsurge of attacks and assassination in Tripoli. Fathi al-Muraymi, spokesman for the speaker of Libya’s House of Representatives, the anti-Islamist government based in the eastern city of Tobruk, declared, “The shipment was on its way to the terrorist groups and the extremists and outlaws.”

Those illicit weapons shipments, however, were only the tip of the iceberg. 'Abd-al-Qadir Abdallah Abis, chief of the military police in Tobruk, announced that police had recently stopped one Land Cruiser and gave chase to another and found them packed with Turkish weaponry. Then, on January 7, 2019, officials in Misrata, a town near Tripoli, announced that they had intercepted yet another Turkish weapons shipment, this time in a container marked as transporting household goods and children’s toys. With every shipment intercepted, Ankara’s pleads of ignorance become increasingly implausible. A recent assassination attempt on the primary Libyan investigator of the shipments suggests there remains much to hide.

What is Turkey’s end game? Under the fifteen-year administration of Recep Tayyip Erdoğan, Turkey has effectively become a police state. When weapons flow, it is because Erdoğan wants weapons to flow. But for any group to ship large quantities of weapons through a Turkish port undetected is simply impossible. The situation with regard to Libya is reminiscent of weapons-bearing trucks intercepted in Turkey on their way to Syria. In that case, Erdoğan ordered the trucks released as they were operated by Turkey’s intelligence service, and he punished the journalists who broke the story.

In the wake of former Libyan leader Muammar el-Qaddafi’s death, the oil-rich North African state divided in two (and, if lawless southern Libya is considered, then three): In Tripoli, a UN-recognized government effectively splits power with Islamist groups while, closer to the Egyptian border, the Tobruk-based House of Representatives government fights Libya’s Islamic State and Al Qaeda-affiliated militias. While Egypt, Saudi Arabia, Jordan and the United Arab Emirates support the more secular, anti-Islamist Tobruk government, Turkey has joined Qatar and Sudan to prop up Libya’s Islamists. It is against this context that Turkish weapons entered the scene. Simply put, as Qatar has become the go-to financier of the Muslim Brotherhood and its more radical offshoot groups around the globe, Turkey has become their armorer.

Turkey’s goal might not only be the empowerment of radical groups to destabilize Libya. Erdoğan sees the rise of Abdul Fattah el-Sisi in Egypt as an affront, both because Sisi’s rise reversed Muslim Brotherhood control of Egypt, and because Erdoğan subsequently lost lucrative contacts inside Egypt. An Islamist Libya could provide refuge for groups dedicated to undercutting Egypt’s stability and returning Islamists to power.

Algeria, too, is also worried by Erdoğan’s latest moves. Algiers is convinced that at least some of the weaponry which Turkey sought to smuggle into Libya were destined for terrorist groups in neighboring Algeria.

Then, there’s Boko Haram, the Islamist group best known in the West for the mass kidnapping of Nigerian schoolgirls. In 2014, a tape recording surfaced of a conversation between a top Erdoğan advisor and the private secretary of the CEO of Turkish Airlines that appeared to suggest the leadership of the state-owned Turkish Airlines was upset with having to smuggle arms into Nigeria, apparently to be utilized by insurgents like Boko Haram. And, of course, when an Al Qaeda affiliate overran northern Mali, an Erdoğan appointee described the French force invited in to defeat them as the real terrorists.

In Washington, the role and behavior of Turkey remains the subject of fierce debate: Is Erdoğan fundamentally anti-American? Is his pivot toward Russia ideological or transactional? Can Erdoğan be trusted to take on the Islamic State in Syria if and when the U.S. withdraws? Often, countries’ ideologies supplant pragmatism as distance increases from their borders. In such a case, Turkey’s increasingly destabilizing actions in Africa provide a window into Erdoğan’s thinking and Turkey’s new directions, not as a bridge between East and West, but rather as a catalyst for insurgency and Islamist terrorism. It’s time to recognize reality: Turkey is today what Saudi Arabia was in the decades before the September 11, 2001, that is, a sponsor of radicalism on a global scale. It is a lesson ignored in Washington, but increasingly recognized as reality in Africa. Put another way: While U.S. authorities castigate Iran for its illegal weapons shipments undercutting sovereignty and stability in countries like Lebanon and Yemen, Turkey is doing much the same thing, and for similar goals.