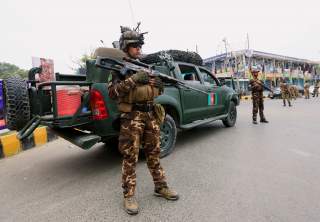 Less than a week after U.S. Special Representative for Afghanistan Reconciliation and chief U.S. negotiator Zalmay Khalilzad announced that the protracted negotiations with the Taliban are nearing completion, President Donald Trump brought an end to the ceasefire talks as retribution for the group’s killing of an American soldier. The agreement reached “in principle” would have allowed the Trump administration to begin drawing down U.S. troops from the country heading into an election year. The reports of progress in the talks with the Taliban were welcome news for advocates of military restraint and those who champion diplomacy and responsible statecraft grounded in foreign policy realism.

President Trump is right to deliver on his campaign promise to bring our troops home. The breakdown in the talks should not impede the Trump administration from ending our “forever war” and leaving Afghanistan after close to two decades. It was always doubtful whether the Taliban had any serious intent to end hostilities with the United States or that the group could be trusted to hold up its end of the bargain. The cessation of U.S. military engagement in Afghanistan should not depend on negotiating a peace deal with the Taliban and could still be accomplished regardless of developments on that front.

Our strategic imperative to leave could be realized by adopting a strategic realignment on three fronts in our Afghan policy. First, Washington should encourage the Afghan government to deal directly with the major regional stakeholders in its neighborhood who have a permanent interest in a secure and stable Afghanistan.

Second, the Trump administration needs to use its leverage with its allies in Riyadh and Islamabad to undermine the Taliban's external sources of support via instrumenting a “maximum pressure” campaign against rogue elements among Pakistan’s Inter-Services Intelligence (ISI) and private Wahhabi donors in Saudi Arabia.

Lastly, the United States already has a robust military presence in the surrounding region with which it can support Kabul. By conducting special forces operations and surgical strikes as a last resort, Washington can prevent international terrorist organizations from gaining a foothold in Afghanistan or seeing the country succumb to a full-fledged civil war that foreign Islamist fighters, such as the Islamic State, could exploit. Such operations will not prevent a full withdrawal and can serve as a useful stopgap as the United States implements its primary objective of transitioning its Afghanistan counter-terrorism strategy to major regional stakeholders.

Pushing for a Regional Security Architecture

The international system abhors a vacuum. From a realist standpoint, it is likely that a U.S. pullout will open the Afghan theater to a host of regional powers rushing in to protect their interests. This strategic rebalancing is a reality that should be encouraged rather than feared. The majority of these regional powers will hope to strengthen the central government in Kabul and avoid the scenario of Afghanistan falling into another civil war and becoming a safe haven for global terrorism. In practice, this should result in burden sharing among these powers looking to bolster Kabul against internal threats and realize a secure, stable, and independent Afghanistan they could partner with moving forward. A deal with the Taliban does not need to be a litmus test for a successful withdrawal.

What became increasingly clear through multiple rounds of the Doha talks was the faulty assumption that the only path to withdrawal for an American administration desperate to leave would entail the United States securing an agreement with the Taliban, even if that meant accepting an unpalatable deal. Instead of relying on a problematic agreement with the Taliban that will be difficult to enforce if it could even be attained, the United States should instead focus on assuaging Kabul’s concerns post-withdrawal. This means encouraging Kabul to engage with regional stakeholders and develop strategic partnerships with Tehran, Moscow, New Delhi, and Beijing in order to establish a working regional security architecture that would serve as an ultimate safeguard against the Taliban overrunning the country. We can call this post-U.S. strategic environment, the Afghan Corridor Security Architecture (ACSA).

It is a fact that the United States cannot remain in Afghanistan forever. As both the New York Times editorial board and realist scholar Barry Posen have argued, in the wake of U.S. withdrawal, Afghanistan’s neighbors will find it necessary to step up to protect their interests there because they can no longer pass the buck to the United States. Washington might as well spearhead efforts to bring in the major regional stakeholders, while it still has some leverage left. Afghanistan’s stability as a nation-state is in the long-term interest of its neighbors: Iran is fearful of a potential Salafi stronghold on its eastern front as it also struggles to host millions of refugees, the majority of which are Afghans. India sees Afghanistan as a central hub for expanding its economic footprint in Central Asia. For China, given its strategic commitment to the success of the Belt and Road Initiative (BRI), a secure and stable Afghanistan that could sustain safe and dependable transportation routes is of critical importance. Lastly, Russia regards radical Islam as a threat to its national security given the large Muslim population in its southern territories (particularly in North Caucuses and Tatarstan) and can ill afford an Afghanistan that serves as a sanctuary for global Salafi terrorism.

Iran has long-standing cultural, economic, and security ties with Afghanistan. Last year, Iran became Afghanistan’s largest trading partner—replacing Pakistan—with trade reaching $3 billion in 2018. In fact, Iran’s economic role in Afghanistan was significant enough that the Trump administration gave waivers to Iran’s Chabahar port—an Indian-financed port and free trade zone that will serve as a critical link to sea for landlocked Afghanistan, while also giving New Delhi access to Central Asian markets bypassing Pakistan. This is despite the hawkish pressure campaign against Iran led by the administration. Iran already hosts 2.5-3 million Afghan refugees, given decades of instability and war, which could only increase as ISIS’ offshoot in Afghanistan, Islamic State in the Khorasan Province (ISKP), escalates its targeting of civilians in that country.

ISIS’ expansion into Iraq and Syria was deemed a critical threat to Tehran, leading it to send its elite Qods force and military to neutralize them. The larger footprint of ISIS in Afghanistan continues to be a grave concern to Tehran’s Shiite government. If the Taliban were to afford the ISKP a foothold in their occupied territories, Iran will likely intervene in Afghanistan as it did to its west. Iran has a long track record of fighting Islamic Salafists in the region. In 2001, Iran was willing to assist the United States in overthrowing the Taliban, so much so that James Dobbins, the Bush administration’s Special Envoy for Afghanistan and Pakistan, called the Iranians “particularly helpful.” In fact, Dobbins claims it was a coalition of Russia, India, the Northern Alliance, and Iran, aided by American airpower, that led to the fall of the Taliban—not the United States alone. As recently as last year, Iran participated in trilateral talks with Kabul and New Delhi where combating extremism was a main talking point.

China, too, has an interest in a stable Afghanistan. In the past two decades, Beijing has accelerated its aid to Kabul with investments totaling over half a billion dollars. China’s interests in Afghanistan are both economically motivated and driven by Beijing's national security priorities. China seeks increased security and stability in the region in order to expand its infrastructure projects, namely its transportation corridor, as part of BRI. The security issues have already led to a failed mineral mining deal. Domestically, Beijing is growing weary of ties between the Taliban and Uighur separatists in Xinjiang province. There have been reports of Uighur fighters joining the Taliban’s war effort in Afghanistan. China fears the spread of Islamic extremism into its western frontier could further destabilize its already problematic relationship with its Muslim Uighur minority.

Similarly, Moscow has experienced decades of conflict owing to the spread of Islamic extremism to its borders and hopes to avoid re-instigation in its southern regions with radical fighters and ideology extending into Tatarstan and the Caucasus as they have in the past (Chechnya is a case in point). Stability in Central Asia also constitutes a strategic necessity for Russia. Afghanistan remains a buffer state between the secular states in Central Asia ranging from Turkmenistan to Kazakhstan and the extremist Taliban.

The central solution to our Afghanistan quagmire entails creative diplomacy—not a military approach. The powers in the region have a major stake in a stable Afghanistan. If the United States wants a smooth transition out of Afghanistan, liaising with these powers would be both pragmatic and prudent. For Washington, it could also serve to de-escalate tensions, whether it be in the context of the nuclear dispute with Iran, trade negotiations with China, or with Russia due to its intervention in Ukraine and the subsequent sanctions.

The United States must also leverage its influence over its partners in Riyadh and Islamabad to clamp down on the major sources of the Taliban’s external support, especially the group’s long-held connections with the Pakistani ISI and individual Wahhabi donors in Saudi Arabia.