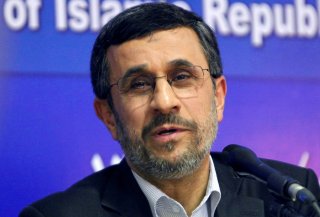 Former President of Iran Mahmoud Ahmadinejad was reportedly forced to leave the United Arab Emirates after his visit to the Expo 2020 in Dubai was cut short at the insistence of Emirati officials.

Iran’s state-run Fars News Agency announced the exit on Twitter, claiming that the former president had departed the country and returned to Iran at 9:00 that evening.

While the reason for the departure was not specified, observers have noted that Ahmadinejad, who has sometimes run afoul of the ruling authorities in Tehran, was prevented from giving a press conference at an Iran-linked hotel prior to his exit.

Fars separately described Ahmadinejad’s trip to Dubai as a “desperate attempt to be seen.” The unofficial and unsanctioned visit to Expo 2020 came as a surprise to many observers, and a rumor circulated that he had visited the Israeli pavilion at the event—a rumor that was described as malicious and quashed by his staff.

Ahmadinejad remains one of the most controversial political figures in modern Iran. Prior to the presidency, he served as Mayor of Tehran, establishing effective social welfare programs but rolling back political reforms implemented by previous mayors. In 2005, he unexpectedly defeated establishment stalwart Akbar Hashemi Rafsanjani and was re-elected in 2009 in a contest widely described as fraudulent. That election led to mass protests among Iranians, which were eventually suppressed but caused increasing tensions between Ahmadinejad and Supreme Leader Ali Khamenei.

In the West, however, Ahmadinejad is better known for his outrageous political statements, as well as anti-Semitic remarks and actions—including hosting a Holocaust denial conference in Tehran in 2006, as well as calling for Israel to be “wiped off the map.” (While Ahmadinejad has repeatedly expressed the sentiment, this precise translation has been disputed.)

Ahmadinejad has remained in political exile since the expiration of his term in 2013 but has repeatedly and unsuccessfully sought to return to public office. He made steps to run for president again in 2017 and 2021, but although he polled highly among the Iranian public, his candidacy was rejected by the ruling Guardian Council both times, leading to public acrimony.

The Dubai Expo 2020, delayed until October 2021 on account of the coronavirus pandemic, has been feted as a celebration of all participating countries’ achievements. However, it has been the subject of controversy, with a boycott from the European Parliament over the UAE’s mixed human rights record.