Fuel to the Fire: Hezbollah Threatens War With Israel Over Disputed Gas Field 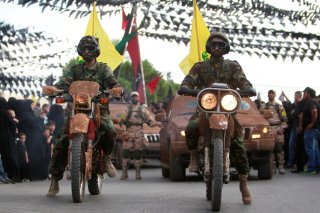 Hassan Nasrallah, the leader of Lebanon’s Hezbollah militia-turned-political party, warned that the group would react violently toward Israel if it attempted to begin drilling operations in the Karish offshore gas field, a disputed area between the two countries.

In his remarks, delivered to the Al-Mayadin television network, Nasrallah implied that Israel might eventually be allowed to conduct drilling in the field, but not before it reached an agreement with Beirut regarding the field’s status.

“If the Karish oil and gas extraction starts in September, before Lebanon gets its rights, we would be heading for trouble,” Nasrallah said, claiming that the group “would do everything necessary to achieve our goal”—explicitly including the use of force.

“No one wants war, and the decision is in Israel’s hands, not ours,” he added. “The president of the United States does not want a war in the region, and that is our opportunity for us to press and achieve our oil.”

The Lebanese cleric and political leader also implied that Hezbollah could launch attacks on Israeli oil and gas fields outside the Karish zone if Israel failed to heed his warnings, implying that the group’s stockpile of long-range missiles could target Israel’s existing Leviathan and Tamar offshore gas fields, both of which lie within its undisputed exclusive economic zone, or EEZ.

Unlike neighboring Syria and much of the Middle East, Lebanon does not have domestic oil or gas reserves, and it has historically relied on Syria for its imports. Political leaders in Beirut have expressed interest in developing the Karish field, but Lebanon’s ongoing financial crisis has precluded substantial investments in offshore gas drilling, theoretically clearing the way for Israeli development. Israel’s Leviathan and Tamar fields, which respectively contain roughly thirty-five trillion and seven trillion cubic feet of gas, are far larger than the Karish field, which contains less than two trillion.

Israel and Lebanon have technically remained at war since 1948, and both Israelis and those who have visited Israel are forbidden from entering Lebanon. Although Israel and Lebanon came close to negotiating a formal peace agreement in 1983 during Israel’s military intervention in Lebanon’s fifteen-year civil war, the proposed treaty was scrapped following a change in government the following year.

While neither Beirut nor Tel Aviv has made significant moves towards peace or diplomatic recognition since the end of the war in 1990, they agreed to negotiations over the maritime border dispute in October 2020. U.S.-mediated talks are ongoing in the southern Lebanese city of Naqoura.