The Gulf Cooperation Council Rift with Qatar is Far From Over 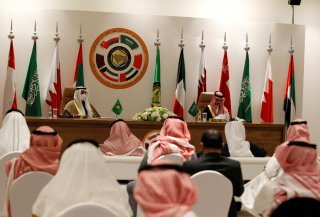 Saudi Arabia’s announcement on January 4 to end its political and trade embargo on Qatar, while promising for the Middle East, is not sufficient enough to overcome the region’s divisions. The countries’ three-year rift has hardened existing fault lines in the Middle East and North Africa (MENA) that are unlikely to be drastically affected by the deal. Recognizing this, the focus should remain on supporting regional cooperation and a rules-based Gulf Cooperation Council (GCC), as fighting arbitrary feuds similar to the rift between MENA states will be crucial to healing relations between the two blocs and resolving other regional issues.

Skepticism regarding the true impact of the truce between Saudi Arabia, the United Arab Emirates, Bahrain, and Egypt, on the one side, and Qatar on the other, are warranted. This is not to suggest that mask-cladded embraces by Saudi Arabia’s Crown Prince Mohammed bin Salman (MBS) and Qatar’s Emir Tamim bin Hamad al Thani such as the one at the GCC summit on January 5 should not be welcomed. Rather, such meetings at the summit need to be viewed as a positive step towards cooperation amongst the regional rivals.

The opening of Qatar’s only land border, as well as its sea and air crossings with Saudi Arabia, should be regarded as a positive step. The “Solidarity and Stability” agreement between the two Gulf monarchies on January 5, including the United Arab Emirates (UAE), Bahrain, and Egypt, to end the blockade in exchange for Qatar’s rescinding of its lawsuits in response, should be praised as a major diplomatic victory for region marred by far too many conflicts.

Yet it is still worthwhile to note the difficulties of achieving the success found in this deal. The embargo imposed by the three GCC members and Egypt began in 2017, lasting three and a half years. This is due, in large part, to Saudi Arabia, the UAE, Bahrain, and Egypt’s accusations against Qatar of supporting extremist groups throughout the region and their subsequent decision to lay down harsh punishments, followed by another thirteen unrealistic demands upon the realization that Qatar would resist.

Naturally, this produced a stalemate as neither side expressed an interest in capitulation. Over time, Qatar gradually moved closer to Turkey and Iran to balance against the newfound enemies at its borders, hardening divisions and ultimately the rift. Attempts to mend the rift have continuously failed, with the last round of Kuwait-led negotiations collapsing at the end of 2019.

Renewed efforts to mend the rift resulted in improved outcomes as Kuwait, supported by the United States, led to a new round of mediation efforts between the two blocs in 2020. These efforts ultimately produced public statements in December hinting at a deal, marking a major turnaround in just one year.

This turnaround, due in large part to a major uptick in engagement by both Kuwait and the United States, resulted in the recent deal between Saudi Arabia and Qatar. In this critical moment for the GCC and MENA relations, it is important to understand why and how the deal was reached to build and sustain momentum moving forward.

Most importantly, the timing of the deal suggests that Saudi Arabia is working to hedge risks associated with a potentially poor relationship with the incoming Biden administration. President-elect Joe Biden made this clear when he declared Saudi Arabia a “pariah” and promised to end arms sales to the country.

While Biden’s stance has softened Saudi Arabia’s position, it has not done so with regard to the UAE. The Emirates originally dismissed attempts by Saudi Arabia to pressure it into ending the boycott with Qatar. Given the UAE’s hardline stance against Islamists, this is not surprising, suggesting it and other GCC members’ disdain for a resolution and Islamists is likely to endure beyond the deal. As a result, continued diplomatic pressure and mediation will be necessary to sustain and expand upon this diplomatic success.

Given the Kuwait-led model and the country’s interest in mediating the dispute, its approach should be followed moving forward. More importantly, it is crucial to allow countries within the region and GCC to lead work towards regional unity and conflict resolution. This is not to suggest that the United States should remain on the sidelines. Instead, it means that any U.S. engagement needs to empower states within the region with powerful diplomatic abilities and ties to both regional blocs, such as Kuwait or Oman.

What the United States can, and should, do is work to support gradual regional unity through diplomatic and economic engagement while holding states accountable for abuses. Resolving the rift lies at the core of goals like a regional security infrastructure, a strong rules-based regional governance institution in GCC, and the promotion of human rights principles. The incoming Biden administration needs to recognize this in order to support a continuation of mended relations that will both end the rift and heal regional divisions.

Ensuring a better future for the region starts with realistically recognizing the weight of this moment as a step towards a more cooperative region. Now is not the time to take a victory lap but rather an opportunity to tackle bigger issues that foster regional unity.