How Human Rights Should Drive Biden’s Relationship with Turkey 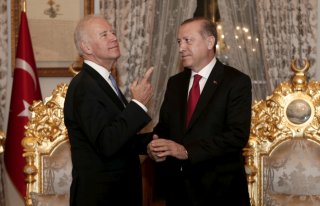 The decline in relations between the United States and Turkey during the reign of President Recep Tayyip Erdogan is unparalleled in our ninety-four-year history with the modern Turkish state—and it is about to get worse. President Joe Biden is expected to become the first president to recognize the Armenian genocide this month. It is important, necessary, and more than a century overdue. It will still be tough medicine for Erdogan to swallow though and a harsh response is likely. Recognizing the genocide will spark reformist-minded Turks to reckon with the past and would help jump-start the country’s return to more democratic, accountable, and Western-facing policies.

Facing history will help Turkey take responsibility for what the overwhelming majority of historians say is a genocide: the deportation and murder of a million-and-a-half Armenians. Biden, too, recognizes it as such. He repeatedly called for the United States to recognize the Armenian genocide during his career in the Senate and reaffirmed his position as a candidate for the presidency, warning that “if we do not fully acknowledge, commemorate and teach our children about genocide, the words ‘never again’ lose their meaning.”

Washington’s recognition of the genocide could threaten U.S. access to Incirlik Air Force Base, a NATO facility, as well as other military bases in Turkey. Still, it is an urgent step we must take. Turkey is undermining U.S. national security interests in the region and slipping more deeply into repressive, violent, and undemocratic behavior at home.

Alarming Turkish regression began in recent years with the arrest of an American pastor, Andrew Brunson, and the decision by Erdogan to detain him for 736 days. Since then, Erdogan has dispatched Islamist jihadis under Turkey’s control to Syria, where hundreds of Kurdish fighters serving as America’s boots-on-the-ground were killed. Armenian, Chaldean, and Assyrian Christian civilians were murdered. Through Turkey’s National Intelligence Agency, Erdogan deployed jihadi gangs that decapitated civilians, mutilated bodies, and drove hundreds of thousands of ethnic Armenians from their homes during fighting in Nagorno-Karabakh. Turkey’s aggressive moves have put it at odds with almost all of its neighbors.

Turkish forces are deployed in Syria, Iraq, and Libya. Turkish warships enforce Turkey’s natural gas claims in the Eastern Mediterranean, risking open confrontation with Greece, Cyprus, and Israel. Erdogan has even doubled down in that conflict, ignoring calls for dialogue and reconciliation.

It’s not just Erdogan’s neighbors who see him as a threat. Freedom House, an international human rights watchdog, downgraded Turkey from “partly free” to “not free” in response to its abuse of political and civil rights and its denial of Internet freedoms. Through it all, Erdogan denies the Armenian genocide, purchases sophisticated weapons from Russia, and levels attacks on those who oppose him in the pro-Kurdish People’s Democratic Party.

U.S. recognition of the Armenian genocide won’t cause Ankara to end its increasingly malign behavior. President Biden and Congress should begin a review of all available options, including intensifying existing sanctions applied against Turkey for purchasing S-400 missiles from Russia under the Countering American Adversaries Through Sanctions Act (CAATSA). New sanctions could also be imposed.

Erdogan fears actions that could undermine support for his Justice and Development Party (AKP) and knows Turkey can ill afford an economic war with the United States and Europe. The Turkish lira has already collapsed from the economic mismanagement. The lira was trading at two lira to one U.S. dollar in 2002 when the AKP won its first election; it has fallen to eight Turkish lira to one U.S. dollar today. Fallout continues as businesses default with creditors and Turkey’s foreign currency reserves have dwindled to dangerous lows.

The United States could also apply sanctions under the Global Magnitsky Act for Turkey’s human rights abuses and its support for jihadis. The power of that legislation could also sanction handlers in Turkey’s intelligence agency and defense ministry.

Once the United States makes the first move, European officials would follow. The EU could impose biting sanctions of its own.

Placing pressure on Ankara is the right thing to do, both morally and strategically. It should be pursued in tandem with recognition of the Armenian genocide that will provide a boost for reformers who can help restore Turkey’s credentials as a respected member of the international community.

President Biden is not in the business of regime change, nor should he be, but he can stand up for our country’s values and defend the long-term value of the U.S.-Turkish relationship. Recognizing human rights abuses and advocating for democratic freedom for all people are two positions the United States can never abandon—no matter which country is the subject of the discussion, friend or foe.

David L. Phillips is Director of the Program on Peacebuilding and Human Rights at Columbia University. He served as a Senior Adviser during the Clinton, Bush, and Obama administrations.

Mark D. Wallace is a former US Ambassador to the United Nations for Management and Reform.