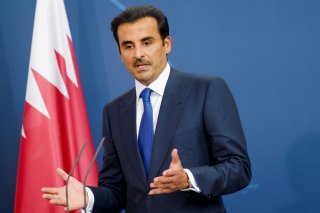 Qatari emir Sheikh Tamim bin Hamad al-Thani recently gave an interview to Le Point, noteworthy not only because it was the first interview he has granted to a Western print outlet, but also because he expounded on a range of important subjects.

Al-Thani’s musings offer insight into one of the Middle East’s most consequential leaders at a moment of regional tumult, heightened global tensions, and great power competition.

With just 300,000 citizens inhabiting a tiny country squeezed between Saudi Arabia and Iran, Qatar is perhaps best known for boasting the world’s highest per capita income.

But it is al-Thani’s deliberate advancement of a foreign policy that eschews conflict in favor of dialogue that makes Qatar stand out in the volatile region.

In remarks to his nation’s first democratically elected legislature in 2021, al-Thani declared that “we do not seek to compete with or emulate anyone, but rather to carve out our own niche” through an “adherence to dialogue as an alternative to wars.” Pointing to Qatar’s seminal role in Afghanistan, the emir offered Doha as “a hub for dialogue and peaceful resolution of disputes.”

Expanding on these themes in Le Point, al-Thani observed that his country’s foreign policy “aims to bring different points of view together, to help all parties who need it, and to play a role of facilitator, in the region and beyond.” At a moment when many are approaching international affairs as a zero-sum game, Qatar is admirably articulating an alternative paradigm.

“The world needs dialogue to solve its problems. The best recent example is what we did in Afghanistan, when our U.S. friends asked us to help them make connections with the Afghans to find a peaceful solution to the war. We did it,” al-Thani noted to his French audience.

He’s right. As Rep. Scott Taylor (R-Va.), a former Navy SEAL, observed in 2021, Qatar “saved our butts” in Afghanistan by spearheading the evacuation of 124,000 Americans, Afghans, and other third-country nationals. Since the American embassy’s relocation from Kabul to Doha, U.S. authorities have conducted “over the horizon” counterterrorism operations, effectively managing a daunting security challenge remotely.

There is much to reflect on in al-Thani’s expansive interview. A few highlights:

On recent great power competition, which has elevated global anxieties, al-Thani says, “We do not want to see the world polarized between two superpowers; that would be very dangerous. … Our country is a major ally of the U.S. and the West in general, but our main importer of liquified natural gas is China. We can only note that there are great differences between them, but we hope that tensions can be resolved through diplomatic and peaceful means.”

Regarding the spike in global gas prices resulting from Putin's war in Ukraine, al-Thani asserts that “we want to help Europe and we will supply gas to Europe in the coming years. But it is not true that we can replace Russian gas. Russian gas is essential to the global market. The most important point is that we are all suffering from the situation, whether it is in terms of energy or food. That is why the war in Ukraine must end.”

On Iran, al-Thani offers that “we are talking with our U.S. allies, and we are talking with the Iranians, because Iran is our neighbor. It is in our duty and interest to do everything to bring the parties together and to encourage them in negotiating a peaceful settlement.” Qatar’s detractors sometimes castigate the Gulf emirate for playing “all sides of the field”—maintaining ties with international pariahs like the Taliban, Hamas, Iran, and the Muslim Brotherhood. But the criticism ignores the fact that the United States encourages Qatar’s role as a trusted intermediary because it produces results. The Qatari foreign minister has repeatedly sought to dispel concerns about his country’s allegiances, including when he said on Fox News that “this partnership between Qatar and the United States is … for us the most important … strategic relationship that we have with any other country in the world.” That the nation hosts one of the largest American air bases outside the United States at al-Udeid is a clear indication that it isn’t just rhetoric.

When discussing the unresolved roots of the Arab Spring, al-Thani contends that there is much work to do: “Poverty, unemployment, unemployed graduates... Have we solved these problems? No, on the contrary, they have worsened! If we don't address them, the events that they caused may repeat themselves. In my opinion, the best way to prevent turbulence … is to implement reforms, gradually … Qatar promised to educate ten million out of school children and we have surpassed that promise. Soon we will reach fifteen million primary school children. We also need to provide jobs, opportunities, but also let them express their opinions and differences. Qatar has established programs to help train more than two million young people in the Arab world and provide them with job opportunities.”

While acknowledging the persistent challenge of peaceful relations between Israelis and Palestinians, al-Thani re-asserts his longstanding commitment to a two-state solution. That Qatar has long used its wealth and influence to aid the people of Gaza and the West Bank and contain hostilities in one of the region’s most explosive hot spots is commendable.

Al-Thani’s reflections offer a timely reminder of how a small but consequential country on the Arabian Peninsula is balancing relations with global powers by rejecting binary approaches to produce favorable (or at least less harmful) outcomes. The world could do worse than to leverage Qatar’s willingness to play the role of global interlocutor as an alternative to the use of force and coercive diplomacy.