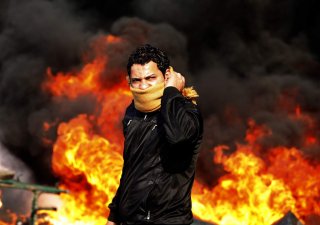 There is a fundamental sickness in liberal foreign policy. So argues John Rossomando, an analyst at the Washington-based think tank for The Center for Security Policy and a former researcher for the Investigative Project. He diagnoses the pathology in The Arab Spring Ruse: How the Muslim Brotherhood Duped Washington in Libya and Syria.

Rossomando’s book examines the Obama administration’s attempt to harness Islamist forces in the Middle East by giving them a helping hand. As it turned out, that approach didn’t work. Engaging, enabling and empowering Islamists just made everything worse.

This is important history to remember. Unfortunately, the Biden administration appears to have forgotten. It is making the same mistakes.

When the Arab Spring exploded in 2011, writes Rossomando, “In every case, these nascent revolutions were portrayed to the public as a long-awaited awakening of democracy in the Middle East, yet the reality was more complicated.” In part, this was because civil society in these countries had been long suppressed. Democratic voices lacked institutions, leaders, organization and money. Islamists did not. In many cases, they were the first movers in supplanting the old guard and attempting to seize political power.

The Obama administration, Rossomando argues, made a strategic calculation. They would try to work with the Islamists and, by pleasing them, make them more moderate and “build back better” regional partners for the United States.

This made sense to Team Obama for several reasons, starting with the fact that coopting adversaries with inducements was President Barack Obama’s preferred method of operation. The Obama premise was that, if the United States would do its competitors a solid, then the competitors would reciprocate by leaving the United States alone. Washington could then disengage from the region and outsource regional issues to their new friends. Obama had earlier tried versions of this foreign policy with Russia, China and Iran—why not the Islamists?

Another reason why this policy made sense for the Oval Office is that many in the president’s orbit were predisposed to favor Islamist groups, the Muslim Brotherhood in particular.

There were also emerging strains of anti-Semitism in the president’s party, particularly reflected in attitudes and policies aimed at diminishing Israel.

The Arab Spring provided a perfect opportunity for Obama to experiment with normalizing Islamist extremists.  In this, he was about as successful as Dr. Frankenstein.

Unsurprisingly, the Islamists proved more interested in advancing their extremist agendas than evolving into the likes of Obama’s Chardonnay-swilling neighbors in Martha’s Vineyard.

In The Arab Spring Ruse: How the Muslim Brotherhood Duped Washington in Libya and Syria¸ Rossomando unleashes his investigative skills and unpacks how the tragic consequences of Obama’s failed initiative played out in Libya and Syria, two nations that suffered by far the worst in the aftermath of the Arab Spring. This is not an exercise in taking potshots at the former president’s policies. Rossomando musters more than enough facts to make his case. He amply demonstrates how Obama waffled between naivety and malfeasance, then invested more time covering up the consequences of his foreign policy failures than repairing them.

This look back speaks to the present day because the Islamists haven’t gone anywhere, and they are about as healthy to the future of democracy as a candy diet to a diabetic. Most of the Obama team is back as well, holding key posts in the Biden administration. And, while lightning may not strike twice in the same place, Obama policies definitely have. Exhibit A: the irresponsible voices in the administration that actually believed the “new” Taliban would not be as terrifying as the “old” Taliban.

What most people have learned so far is that, not only are the Taliban terrible, but the Biden team was willing to go out of its way to make nice with them. Not surprisingly, this hasn’t worked very well. What’s more worrying is that this administration seems so myopically focused on following the foreign policy failures of the Obama team. If they persist, then without a doubt there will be more tragedies like those described in The Arab Spring Ruse: How the Muslim Brotherhood Duped Washington in Libya and Syria.