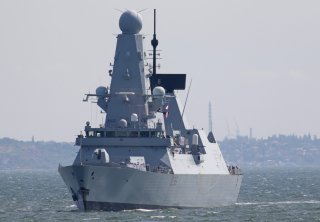 British officials announced on Thursday that the Royal Navy had seized a ship attempting to smuggle Iranian missiles into Yemen earlier in the year. The announcement underlines the military cooperation between Iran and the northern Houthi rebels in Yemen, eight years into the country’s stalemated civil war.

Britain’s Defence Ministry published details of the seizures in a statement on Thursday, claiming that the missiles had been captured during a pair of interdictions on January 28 and February 25. The statement claimed that the HMS Montrose had carried out both seizures with assistance from a Wildcat helicopter, as well as additional assistance from the USS Gridley, a U.S. Navy destroyer, on the second.

The British Defence Ministry’s statement emphasized that the capture of the vessel—whose international registry was not specified—provided the strongest evidence yet of military cooperation between the Houthis and Tehran, which is widely thought to be supporting the rebel movement as part of its regional cold war against Saudi Arabia, an active participant in the war alongside pro-government forces. The statement noted the sophisticated nature of the Iranian shipment, which included both Iranian 358 surface-to-air missiles and engines for land-based 351 cruise missiles.

“These interdictions demonstrate the professionalism and commitment of the Royal Navy to promoting stability in this region,” Commander Claire Thompson, who commands the Montrose, said in the statement. “I am extremely proud of my crew – the Royal Navy sailors, aircrew and Royal Marines involved in these endeavors and the significant positive impact they are having in maintaining the international rules-based order at sea,” Thompson added.

The statement observed that the seizure had been “the first time a British naval warship has interdicted a vessel carrying such sophisticated weapons from Iran,” although U.S. Navy ships operating near Yemen have previously seized smuggled missiles destined for the conflict.

Although Tehran has rarely been caught directly transferring its munitions to Yemen, forensic analysis of seized weapons has overwhelmingly pointed to Iran as the source country. Once inside Yemen, the missiles have often been used by the Houthis to attack targets within Saudi Arabia, as well as international shipping in the Red Sea and the Gulf of Aden.

British armed forces minister James Heappey claimed that the British government would “continue to work in support of an enduring peace in Yemen and is committed to international maritime security so that commercial shipping can transmit safely without threat of disruption.”