Interests Over Ambitions: How Joe Biden Can Get a Win on Iran 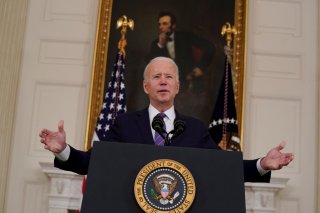 The United States often tries to do too much with foreign policy. Nowhere is this more apparent than in the Biden administration’s attempts to re-enter the Joint Comprehensive Plan of Action (JCPOA) with Iran. Maximalist approaches on Iran are driving the current game of chicken between the two states—much to the detriment of Middle East security and as yet another example of problematic U.S. unilateralism all too familiar from prior U.S. administrations.

Recognizing the need to forgo a maximalist position in support of long-term goals may seem like a concession. Hardliners call for continued sanctions against a severely weakened Iran out of the expectation that this will result in a new deal or new government. They have reason to believe this—Iran’s economy is in tatters, protests continue in multiple cities, and the country currently hosts the worst COVID-19 outbreak in the region with 1.85 million confirmed cases and 62,397 deaths.

Yet realistically, pressure will not force behavioral or regime change in Iran. Hardliners have pushed the same argument for decades with minimal success—just as the last four years of the Trump administration proved. Rather than force change, Iran has managed to nearly triple oil sales by subverting sanctions, import vaccines from Russia and develop others with Cuba, and brutally suppress any symbol of domestic upheaval. “Maximum resistance” has met the challenge of “maximum pressure” time and time again and will continue to do so in the future.

This is what makes the Biden administration’s approach to Iran difficult for those advocating for diplomacy and an immediate return to the JCPOA. Biden and his team advocated for diplomacy with Iran during the campaign and expressed deep criticisms of the Trump administration’s maximum pressure approach, but continue that strategy today. Rather than rejoin the Iran deal outright, as many expected by now, the Biden team is attempting to use leverage created by the Trump administration to get more out of the deal—something Iran will not do in any circumstance.

There are domestic and foreign policy reasons why Iran will not concede. For one, Iran’s leadership has an ongoing revolutionary identity built out of anti-Americanism that forms its legitimacy. Capitulation in this regard would be a sign of weakness and violate this political identity. Additionally, upcoming elections in June make it difficult for moderates like President Hassan Rouhani or Foreign Minister Javad Zarif to make any capitulation to their national arch-rival without appearing weak to hardliners.

Such a move is political suicide in Iran before the election, especially after years of hardship due to Trump administration sanctions. Further, the reality of the upcoming election sets a time limit on achieving a deal, as it is unlikely an agreement will be reached in May or June due to the election cycle.

The Biden team surely recognizes these issues, which suggests that they have limitations of their own at play as well. The first of such limitations relate to power, as the administration wants to save face on the issue without looking weak. Additionally, U.S. regional partners are advocating against simply rejoining the JCPOA. Most importantly, Biden’s Democratic party includes many Iran hardliners, alongside a unified Republican party against any rapprochement with Iran. Any minor shift in support among Biden’s party in response to perceived unfavorable foreign policy decisions may potentially derail Biden’s domestic agenda on many fronts, as analysts like Aaron David Miller correctly highlight.

Yet even with obstacles on each side of the JCPOA negotiations, a deal is possible with a dose of pragmatism. The Biden administration can and should remove sanctions on Iran and rejoin the JCPOA just as the prior administration chose to unilaterally leave in 2018. Not only does this make sense logically and in terms of fairness, but it will help the United States achieve longer-term regional security goals while potentially achieving the better deal desired by U.S. political entities.

Such an approach is pragmatic because it understands the shortcomings on the Iranian side, but also because it recognizes the limitations of U.S. power to realistically change Iranian behavior altogether. Washington cannot convince Tehran to move on more sensitive issues all at once because the United States is not prepared to capitulate on similar Iranian concerns such as its Middle East arms sales or military presence, as Zarif has stated.

However, long-term U.S. interests demand a shift away from the region, meaning that Iran and the United States will share overlapping interests should initial diplomatic overtures be resolved. This is the pragmatism that matters—an understanding by U.S. officials of what can be achieved now versus in the future. However, this will require regional inclusion and engagement that allows leaders of the Middle East and North Africa (MENA) at the national and sub-national level to build a security mechanism for resolving disputes such as malign regional influence.

This in turn presents a second form of pragmatism that must be recognized in Washington. The United States cannot force a Western-centric regional security mechanism on MENA states, but it can help mediate and encourage its partners in this direction. Follow-on talks of this sort should focus on Saudi-Iranian rapprochement and will still require the assistance of neutral arbiters like Oman, but can ultimately lead to what both the United States and Iran prefer: an end of the heavy U.S. presence in the region. Hence U.S. officials need to avoid biting off more than they can or should chew in negotiations today with Iran—to secure preferred long-term outcomes.

To be sure, recognizing this long-term approach comes with risks, and the Biden team may worry about another administration leaving the deal in the near future. That said, pragmatism and a true alignment with wider U.S. interests can not only create a more sustainable deal with follow-on negotiations but result in the potential for wider peace in a region that needs it more than anything else.

Alexander Langlois is a Contributor for the Diplomatic Courier and freelance writer covering MENA diplomacy, peace, and conflict topics at the intersection of global governance. He holds an MA in International Affairs from American University’s School of International Service.