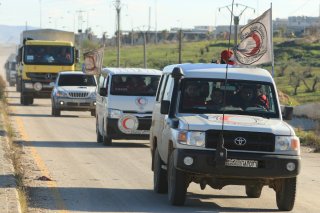 A meeting of international donors in Brussels secured $6.7 billion in pledges of humanitarian aid for Syria and other countries hosting refugees from the war-torn country.

The funding was divided between years, with $4.3 billion earmarked for efforts in 2022 and $2.4 billion to be spent in “2023 and beyond.” International financial organizations, including the World Bank, pledged an additional $1.8 billion for Syria in loans.

Although the fundraising numbers fell well short of the $10.5 billion that the United Nations had attempted to raise in 2022, European officials celebrated the drive. “Despite all the war in Europe, despite the pandemic, donors are sending now a very strong signal to Syria and the region that we are ready to do even more than before for the peace of that country,” Oliver Varhelyi, European commissioner for neighborhood and enlargement, said on Tuesday.

The conference in Brussels was attended by fifty-five nations and twenty-two international aid groups, including the Red Cross. Although the donations were equal to fundraising in 2021, the United Nations had sought to raise more money, as Syria’s financial and humanitarian system have worsened during the COVID-19 pandemic. European Commission vice president Josep Borrell underlined that the EU was “not forgetting the Syrian people,” although he acknowledged that “Syria and the suffering of its people might not be in the center of the news anymore” after Russia’s invasion of Ukraine.

“There is a certain fatigue after eleven years,” Borrell added. “But it remains on our minds. We want and we need to make sure that this situation remains high on the international agenda.”

The Syrian Civil War originated after a series of mass uprisings across the country led to a military crackdown by the government of Syrian dictator Bashar al-Assad. Ten years after the beginning of the war, Assad has largely defeated the multi-sided rebellion and consolidated his rule over the country’s south and west, although a pocket of resistance remains in Syria’s northern Idlib province and the country’s south and east remains outside of his control.

Efforts to aid the Syrian people—an estimated 80 to 90 percent of whom live in poverty—have been complicated by the desire to avoid collaboration with the Assad regime, which could pocket the proceeds. The government in Damascus, also affected by the COVID-19 pandemic and economic crisis, recently indicated that it would cut its budget from $9 billion to $5.3 billion and end critical subsidies on basic goods, including bread and cooking oil.