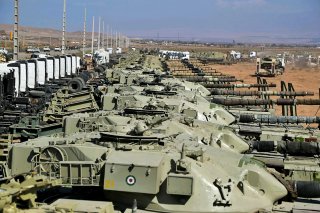 The Iranian military doesn’t have the most modern equipment, but the Islamic Republic has made do with its aging arsenal. It has even been able to produce some equipment domestically. This month, those efforts included the mounting of a new anti-missile system on the turrets of its Soviet-designed T-72M tanks to protect them from attack, the Fars news agency reported on Wednesday.

“The system has been tested and will be installed on the tank turrets. It will be able to deflect all types of missiles by jamming their systems,” Fars reported during the third day of Great Prophet 17 (Payambar-e Azam 17) land and sea military maneuvers that were taking place in three of the republic's southern provinces. The drills were reportedly taking place in three Gulf coastal provinces, including in Bushehr, not far from the country's only nuclear power plant.

Production of the T-72 main battle tank (MBT) began in 1969, and it first entered service with the Soviet Union fifty years ago. It was the most common tank employed by the Warsaw Pact from the 1970s to the collapse of the Soviet Union in 1991. It was also exported to other countries, including Finland, India, Iraq, Syria and Yugoslavia. It was employed by the Iraqi military in the Iran-Iraq War and was considered the feared tank of that conflict.

The Islamic Republic also imported numerous T-72S, the export variant of the T-72M, while it captured about one hundred Iraqi tanks during the war. Licensed production of the locally made version, the Karrar, is still underway at some Iranian factories and the Islamic Republic has sought to modernize its indigenously-built tanks as effectively as possible.

In 2020, Iran unveiled a heavily upgraded and modified version of the tank, the T-72M1, which featured a modified turret with flat armor on its side and a simplified forward-opening hatch. The commander's cupola and machine gun were removed, which give it the appearance of a more modern T-90. However, Iran has rejected that there has been any alleged collaboration in the project.

The modified T-72 Karrar tanks are reported to be in service with the Islamic Revolution Guards Corps (IRGC) and are equipped with a camouflage system that provides concealment against thermal infrared radar detection, while it is also believed to be furnished with an electro-optical fire control system, laser rangefinders, and a ballistic computer.

In addition to seeming to have elements of the T-90, the Karrar has been noted to have features borrowed from the American M1 Abrams and even the British Chieftain tanks. In developing an indigenous MBT, Tehran seemed to have taken elements from other noted tanks. Its main armament is a 125-millimeter 2A45M/M-2/M-5 smoothbore gun with a stabilizer. It appears as though it could be equipped with a new anti-missile system. How effective the tank is remains unknown, but it could far more capable than some of the antiquated hardware the Islamic Republic has had to rely on.