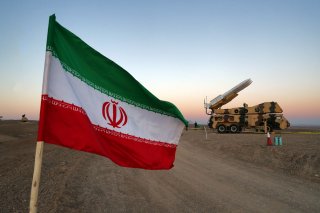 The Iranian military acknowledged on Sunday that it had been responsible for a series of twelve rockets launched from within Iran at Erbil, the capital of Iraq’s northeastern Kurdistan region, on Saturday night.

The Islamic Revolutionary Guard Corps (IRGC), which claimed responsibility for the strike, said that it had been conducted in retaliation for the assassination of IRGC “Quds Force” commander Qassem Soleimani at the hands of U.S. forces on January 3, 2020. Prior to Iran’s official acknowledgment of responsibility, outside observers speculated that Tehran had given the order for the strike, as it had been conducted on Soleimani’s birthday and the rockets had impacted at precisely the same time as Soleimani’s killing.

In addition to Soleimani’s death, observers noted that the strike had taken place one week after an Israeli drone strike in Syria killed two IRGC officers assisting the Syrian armed forces.

The IRGC’s announcement claimed that the rockets had targeted an Israeli facility, alleging that a “strategic centre for conspiracy and mischiefs of the Zionists was targeted by powerful precision missiles fired by the [IRGC].” However, the Kurdish government has insisted that the Israeli government does not operate any facilities in Kurdistan, and local sources described the main target as possibly being the U.S. consulate in the city.

Although local authorities reported significant property damage from the strike and two injuries, no deaths were recorded from the attack. Videos depicting rockets striking the city and exploding from a distance circulated widely on social media.

Iraqi leaders overwhelmingly condemned the attack. President Barham Salih described it as a “terrorist crime” in a statement posted to his Twitter page, and Prime Minister Mustafa al-Kadhimi claimed that Iraq would “face any harm that would target the security of our cities and the safety of our civilians.”

The United Nations Assistance Mission for Iraq, or UNAMI, also condemned the attack, which it characterized as a “heinous” violation of Iraqi sovereignty.

Muqtada al-Sadr, the leader of the largest political bloc within Iraq’s parliament, pledged alongside Kurdish regional president Massoud Barzani that they would form a fact-finding commission on the attack, as well as on allegations of Israeli bases present in Kurdistan.

It is unclear how the attack will affect the ongoing negotiations between Iran and the “P5+1,” a group of world powers that includes the United States and Russia, regarding Tehran’s nuclear program. Although the two sides were reported to be close to an agreement in late February, negotiations were unexpectedly thrown into chaos after the Russian invasion of Ukraine, which led to acrimony and additional demands from Moscow.