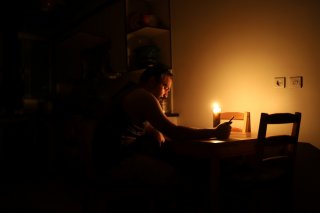 On September 9, 2015, Ayatollah Ali Khamenei, Supreme Leader of Iran, prophesized that the State of Israel would “cease to exist in the next twenty-five years.”

Two years after this declaration, as part of its annual Al-Quds Day festivities, the Iranian government set up a “doomsday clock” in Tehran’s Palestine Square, counting down the days until 2040, by which time the Jewish state would ostensibly be destroyed.

Iran has faced persistent blackouts throughout the summer of 2021. A severe drought in the country has led to a shortage of hydroelectric power. The Islamic Republic’s aging electricity grid has been difficult to maintain without international investment, which U.S. and European sanctions have so far prevented. Iran’s population growth has ensured that the existing grid is no longer able to suit the needs of all of its people. Perhaps most importantly, a severe heatwave has led to increased use of air conditioning (A/C) and other energy-intensive cooling methods.

Because it produces most of its electricity cheaply from domestic oil and gas production, Iran has one of the lowest electricity rates in the world. In previous years, the country has used its comparative advantage in this field to mine Bitcoin, helping the regime avoid international sanctions. However, the government banned the practice in early 2021 to save energy.

The blackouts have affected all sectors within Iran, with traffic lights, telecommunications, utility services such as water pumps, and businesses all affected. In response to excess demand, the Iranian government has instituted a system of rolling blackouts, leading to street protests and a public apology from outgoing Iranian President Hassan Rouhani.

President-elect Ebrahim Raisi, set to take office in early August, has emphasized the importance of diversifying Iran’s energy sources and upgrading its electric grid. However, it is unclear if the ambitious targets laid out in Raisi’s economic plan are realistically achievable during his upcoming term.