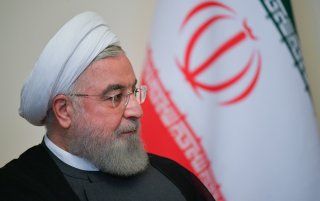 The consensus in Washington has been that the Trump administration’s policy of piling sanctions on Iran to compel it to abandon its nuclear weapons program, failed in its primary objective. However, there is little doubt that the “maximum pressure” sanctions have wreaked havoc on Iran’s economy; they cost the country billions of dollars in lost revenue and have made it difficult for Iranians to import a variety of items—including spare equipment to maintain the country’s aging electrical grid. That grid has remained mostly in place as the country’s population has increased.

Iran’s electricity is mostly reliant on plants generating electricity by burning cheap and abundant oil and gas. Consequently, its electricity rates are among the lowest in the world, inviting waste. In particular, low rates have made it profitable for highly wasteful cryptocurrency mining to take place. Tokens such as Bitcoin have been mined extensively to evade international sanctions; in response to the demand it placed on the power grid, the Iranian government banned the practice earlier this year.

A historic drought has made it difficult for the country to produce hydroelectric power, a significant source of Iranian electricity. Iran’s sole nuclear reactor, located in the southern city of Bushehr, underwent an emergency shutdown in June; the incident was blamed on a faulty generator, which has since been fixed and the plant returned online.

As temperatures have increased in the summer, more Iranians are using electricity-intensive cooling methods, leading to a gap between production and demand. Iran can generate roughly 65,000 megawatts of power under perfect conditions but in practice usually generates 55,000 megawatts or less, owing to breakdowns and technical failures, according to an Associated Press report. The demand for electricity, on the other hand, has increased to 66,000 megawatts.

In response to the high demand and the lack of supply, Iranian officials scheduled rolling blackouts to take the load off of the power grid, and Iran has faced a wave of severe outages. These outages have affected many facets of life in Iran; traffic lights, water pumping systems, stores, and industry have all been affected by the blackouts. So too were “repeaters,” which are devices used to amplify cell phone signals found in major Iranian cities.

While necessary to prevent the total collapse of Iran’s electrical grid, these measures have been visibly unpopular, and have been the subject of dozens of popular protests in recent weeks. They prompted an apology from Iran’s outgoing president, Hassan Rouhani, who acknowledged the difficulties that Iranians experienced from the measures and the government’s challenge in addressing the problem. It is unclear how it will be resolved, though, as the hottest months of summer loom ahead.