Bitcoin Is a Threat to National Security 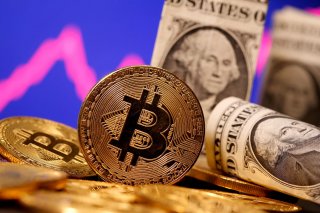 Bitcoin is flying high, the glamour child of market speculators. Even Wall Street’s conservative wealth management firms have begun providing Bitcoin services to clients. Bitcoin was first launched in 2009 for an initial asset value of exactly $0. In October 2010, Bitcoin was trading for around 10 cents a coin. A hundred dollars would have bought about 1,000 Bitcoins. If an investor had held on to those digital “coins,” they would be worth over $62 million today.

Satoshi Nakamoto, a brilliant Japanese software engineer, invented Bitcoin back in 2008, using a blockchain algorithm. It was designed to be the world’s first decentralized digital currency, controlled by no central governmental authority or any middleman. Not surprisingly, Nakamoto has done well, possibly enjoying a personal fortune exceeding $30 billion.

Bitcoin is the anarchist’s dream, offering a currency falling outside the control of any central banking or government authority, and beyond the intermediary moderation levers of the Bretton-Woods global banking system. It was designed to serve as the perfect, anonymous digital medium for the direct purchase of any kind of good or service. Bitcoin is rapidly heading in that direction, gaining mainstream respectability as a “crypto,” electronic currency for the purchase of anything and everything. It is becoming the currency of the Internet, seen by millions as the cool future of a new global currency system, unfettered by government controls and bank clearing systems.

Tesla announced in March 2021 that it will accept Bitcoin in the United States in payment for cars. (It has also bought $1.5 billion of the blockchain coins for its own corporate coffers, generating more profit for the company in a year than from selling cars.) The Swiss consulting firm, Bithome, has property listed around the world for Bitcoin sale on its website, including the United States. Pizza can be bought with Bitcoin at Pizza Huts in Venezuela. Although if a pizza lover had hung on to the ten thousand Bitcoin it cost to buy two pizzas at a Venezuelan Pizza Hut back in 2010, then that person would be sitting today on a fortune worth over $300 million. And if anyone needs socks, “limited edition” Bitcoin socks can be discreetly bought with Bitcoin at the MtSocks website. (Perhaps a playful reference to the infamous Mt. Gox scandal of 2014 when 850,000 bitcoins were hacked and stolen.)

The momentum propelling Bitcoin as a capable, privately controlled, global currency is continuing to accelerate. Coinbase Global, Inc. just went public with an $85 billion market cap. It allows persons to purchase and sell easily not just Bitcoin but about fifty other cryptocurrencies, none of which are issued or controlled by any government. Amazon has recently announced its own plans to create a digital currency for the purchase of goods on its site. With Amazon market strength already exceeding that of most countries, adding a digital currency to its arsenal will raise important questions for the long-term ability of nation-states to control their own economies in the global marketplace.

Sooner or later the United States must come to grips with the threat to national security posed by Bitcoin, or any other, privately created cryptocurrency. The crux of monetary policy is the ability of a nation-state to control its money supply to curb inflation and maintain price stability. If Bitcoin becomes a major, or possibly even the primary, medium for the purchase of goods and services, the U.S. dollar will be looking at an inflationary nightmare with the Federal Reserve struggling to maintain price and interest stability through control of the money supply. Today, the U.S. dollar is the world’s major reserve currency. Bitcoin and other private cryptocurrencies could change that. With soaring U.S. deficits and multi-trillion spending programs, investors could gradually come to prefer storing value in Bitcoin over U.S. dollars. Compared to the dollar, or the Euro, or the Chinese Yuan/RMB, Bitcoin could grow into a favored global reserve currency, unfettered by concerns over national debt burdens, fiscal/monetary policies, or authoritarian controls. Iran, North Korea and other rogue states are already using Bitcoin to avoid sanctions.

The threat to U.S. national security interests posed by Bitcoin becomes even more acute when China is taken into account. Today, over 65 percent of Bitcoin global market supply originates in China. This situation leaves the Chinese Communist Party in the cat bird’s seat. It can covertly influence matters to suit its own purposes, potentially manipulating Bitcoin supply to corrode, attack and disrupt confidence in the dollar. Toppling the dollar as the world’s reserve country could pose as grave a threat to the United States as the Islamic State, the Taliban, or China’s efforts to control affairs in the China Seas.

The potential good news is that a slew of new rules might not be needed to address the risks of Bitcoin. Existing Federal law, including the Constitution, might be an adequate starting point to protect the dollar. The Constitution’s Article I, Section 8, Clause 5 confers on Congress, not private persons, the sole power to create and regulate money. Bitcoin is effectively what Dmitry Shkipin has called a “pirate currency” that threatens the dollar’s position as the sole unit of money authorized in this country. Under federal law, it should be arguably illegal for Bitcoin to be used as a private currency in competition with the dollar. The Coinage Act of 1792 originally delegated the monopoly power to regulate and produce coinage to the Department of the Treasury. The Coinage Act of 1857 took the further step of making use of any foreign coins illegal, because the U.S. Mint had gradually become able to produce an adequate supply of coins to meet domestic demand, making further use of foreign coinage unnecessary. Today the Treasury’s Bureau of Engraving and Printing and the U.S. Mint are respectively responsible for the production of paper currency and coins.

The time has come to stop the use of Bitcoin as a pirate currency before it spreads further into not only the U.S. economy but into the entire global financial system. China likely understands only too well the potential for Bitcoin and other privately created currencies to knock the United States off its financial and economic leadership pedestal. Steps must be taken now before the United States ends up another potential Weimar Republic disaster.

David Harvilicz is a lawyer and entrepreneur based in California.