Iran Sits at the Crossroads of Nuclear Negotiations in Vienna 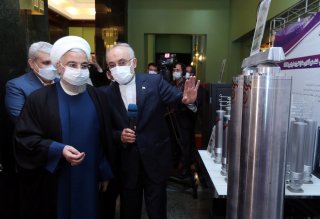 The negotiations in Vienna have raised hopes for the future of the Joint Comprehensive Plan of Action (JCPOA)—the 2015 Iranian nuclear deal. The Trump administration withdrew in 2018 and imposed nuclear, economic, and terrorism-labeled sanctions in a “maximum pressure” approach, which resulted in Iran increasing its uranium enrichment and building advanced centrifuges. President Joe Biden missed the opportunity to take steps to return to the JCPOA via an executive order early on in his tenure. But his administration is now showing a course correction to get diplomacy back on track.

Suzanne DiMaggio, a senior fellow at the Carnegie Endowment for International Peace and Chairman of the Board at the Quincy Institute, recently joined the Ploughshares Fund’s Press the Button podcast to discuss the developments. Over the past two decades, she has led track 1.5 and track 2 conversations to help policymakers identify pathways for diplomatic progress on a range of issues, including regional security, nonproliferation, terrorism, and governance.

Having had no official contact between Washington and Teheran for several months, DiMaggio welcomes the “proximity talks” in Vienna and efforts to resolve the dilemma of who should go first in returning to the deal. The European countries and others are facilitating communications between U.S. and Iranian officials in an effort to return the United States to the agreement and to get Iran to comply with its obligations. But the talks are challenged by difficulties of restoring trust after U.S. withdrawal in 2018 and continued Iranian nuclear developments.

Both countries, however, have shown interest in pursuing a comprehensive implementation approach. As DiMaggio explains, there are currently two working groups to synchronize a return to compliance: “One is focused on the process for lifting sanctions by the US and the other is focused on what steps Iran will take to bring its nuclear program back into compliance.”

Many experts have argued that the window of opportunity to revive the deal is quickly closing. Diplomatic patience is running low, opponents are trying to sabotage the negotiations, and Iranian elections are coming up. DiMaggio expressed her concern over the hardliners in Iran: “They are moving the country into what could be uncharted political territory. After the June presidential elections—unless we’ve made some progress on reconstituting the deal—Iran is going to be facing fundamental decisions on how to confront what they perceive as a mounting alliance against their security.”

That is especially troubling given Iran’s growing capacity to fight asymmetrical wars, upgraded missile systems, and impressive cyber warfare capabilities. Hence, prioritizing a renewal of the JCPOA and “pursuing a strategic opening with Iran,” according to DiMaggio, is crucial.

The international community has developed an understandable distrust for U.S. efforts at diplomacy after the past four years when the Trump administration withdrew from agreements and international organizations. DiMaggio points out: “The way the Biden team has put it: ‘America’s back, diplomacy is back.’ Those are fine words. Now we have to put actions behind it. I think the effort to revive the JCPOA is being welcomed in the same way.”

As the talks continue, one key lesson DiMaggio highlights is that sanctions in diplomacy should be used as the means to reach an end goal—and not “without ever offering an off-ramp for serious diplomacy” as was the case during the Trump administration. It is important the United States continues the review of sanction policy to make sure the programs achieve what they are supposed to.

DiMaggio recommends that the Biden administration should pursue a realistic pathway to reestablish direct bilateral diplomatic communications—independent from the indirect negotiations in Vienna over third parties. She underscores the value of face-to-face dialogue, especially with adversaries. Relying on indirect talks leaves room for miscommunications and misunderstanding, “like when we were little, and we'd play that game of telephone. By the time the message got to you, it was something different.”

Overall, DiMaggio remains optimistic on recent negotiations in Vienna and, more generally, on diplomacy. On U.S.-Iranian talks, she reiterates that although there is “a lot [of] heavy lifting ahead,” it is “doable as long as the political will to get there on both sides remains in place.”

The entire interview with Suzanne DiMaggio is available here on Press the Button.