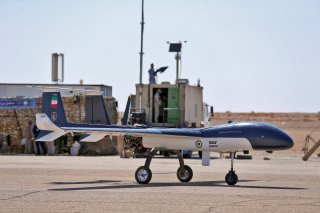 An Iranian general announced on Monday that the military had developed a new suicide drone intended to be used against Israeli port cities in a future conflict, according to the country’s state-run IRIB TV1 television network.

Brig. Gen. Kioumars Heydari, the commander of the Iranian Army’s ground forces, said that the military had perfected its Arash-2 drone, a new and improved version of the existing Arash-1. Both drones are long-range suicide drones, or “loitering munitions,” designed to conduct accurate attacks against ground targets.

Although Heydari did not display the drone, he broadly described its features, claiming that its improved sensors and guidance would allow it to collect information multiple times before accurately determining its target and striking it. The general claimed that multiple Arash-2 drones had already been put into service by the Iranian military and would be used in future military exercises.

The Arash-1, the new drone’s parent, is thought to be around fifteen feet long, with a wingspan of roughly twelve feet. Improvements to fuel efficiency built into the Arash’s design reportedly allow it to travel for 1,400 kilometers, or roughly 850 miles, before hitting its target. The drone is also thought to be designed to evade radar detection, making it challenging to shoot down.

Heydari did not elaborate on whether any of these features had been improved in the new drone, but he claimed in his remarks that both had been “specifically designed … to target Haifa and Tel Aviv,” Israel’s second- and third-largest cities. “[We] are waiting for orders to deploy it one day,” he said.

Iran and Israel have opposed each other since 1979, when the relatively Israel-friendly government of the Shah was overthrown by Shia fundamentalists loyal to the anti-Israel Ayatollah Khomeini. The relationship between Tehran and Tel Aviv has remained icy in the years since, and Israeli officials have argued that Iran’s nuclear program is primarily oriented against it, citing threats to its existence by Iranian leaders. In return, Iran has accused Israel of masterminding a campaign of sabotage against its nuclear enrichment program and several high-profile assassinations of key Iranian nuclear scientists, including lead physicist Mohsen Fakhrizadeh in November 2020.

Iran has also played a key role in arming Hezbollah, the militia and political party in Lebanon which most Western nations regard as an extension of Iranian foreign policy. Hezbollah leaders have openly prepared for a future war against Israel, stockpiling more than 100,000 rockets—many of which came from Tehran—as well as other military equipment including drones.