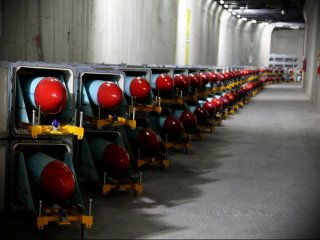 Here's What You Need to Remember: Hezbollah is the world’s most heavily-armed non-state actor. One Israeli soldier described Hezbollah as “a militia trained like an army and equipped like a state,” which makes sense considering the amount of equipment they are sitting on.

Hezbollah’s missile arsenal occasionally snatches headlines. Here is what they have.

Hezbollah’s missile arsenal is mostly “small, man-portable and unguided surface-to-surface artillery rockets,” that serve to terrorize Israel, despite the fact they are not precise guided munitions. Israel maintains that Hezbollah fired roughly “15,000 rockets and missiles on the eve of the 2006 Lebanon War, firing nearly 4,000 at Israel over the 34-day conflict,” which is indeed terrorizing.

Hezbollah’s Secretary-General Hassan Nasrallah is quoted as saying that their missile arsenal is intended to deter Israel. “The purpose of our rockets is to deter Israel from attacking Lebanese civilians…the enemy fears that every time he confronts us, whenever there are victims in our ranks among Lebanese civilians, this will lead to a counter-barrage of our rockets, which he fears.”

Here are the notables in Hezbollah’s arsenal.

The missile rides on a mobile launcher, which makes it very mobile—perfect for quick launches and staying hidden.

In addition to Iran, Syria has also been one of Hezbollah’s Fateh patrons, supplying a number of the missiles. Hezbollah likely has hundreds of these missiles in reserve.

The Koronet is a laser-guided missile similar to the United State’s TOW missile. Its range is approximately 5 kilometers, or just over three miles and can be used in an anti-bunker/anti-building capacity.

It was developed by the Russian Federation in the 1990s and sold to Syria, who subsequently supplied Hezbollah with the missiles. Hezbollah has used the Koronet missile very effectively against Israeli armor, which can be seen in this video.

A Daily Beast article detailed how Russia may be actively supplying Hezbollah directly with missiles, including “long-range tactical missiles, laser guided rockets, and anti-tank weapons,” which presumably would include the Koronet, that Hezbollah is already familiar with.

The Yakhont was developed by—that’s right—Russia sometime in the 1990s. It has a range of 300 kilometers, about 185 miles, and has either a high-explosive or armor-piercing warhead.

Syria took delivery of a number of the Yakhont’s sometime in 2011 and 2013, though it is not certain that Hezbollah has the ability to fire the Yakhont without foreign assistance from a state actor—Iran or Syria. Israel thinks that the Yakhont is “one of the main threats…from Hezbollah, as the missile threatens shipping along Israel’s entire coastline and could complicate any potential blockade of Lebanon.”

Hezbollah is the world’s most heavily-armed non-state actor. One Israeli soldier described Hezbollah as “a militia trained like an army and equipped like a state,” which makes sense considering the amount of equipment they are sitting on.

Current estimates place their rocket arsenal at 130,000 pieces. Hezbollah is armed to the teeth.