ISIS-K Attacks Russian Embassy in the Heart of Kabul 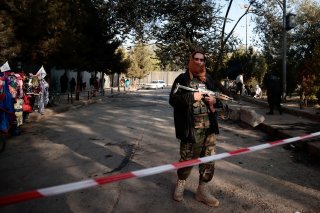 The Islamic State’s Khorasan Province (ISIS-K) within Afghanistan claimed responsibility on Monday for a suicide bombing at the Russian embassy in Kabul. Two Russian staff members and at least four other civilians were killed in the attack.

The group claimed on its Telegram channel that the attack had been carried out by a non-Afghan foreign fighter within Afghanistan’s capital city. Russia’s Foreign Ministry indicated later in the day that two Russian citizens—a security guard and an assistant secretary responsible for consular affairs—had lost their lives in the blast. Most of the victims, however, were Afghan citizens visiting the embassy to apply for visas. Security forces around the embassy reportedly detected the suicide bomber and shot him before he could enter the building, leading him to detonate his vest outside and likely saving dozens of lives, according to the Associated Press.

The Russian government swiftly condemned the attack, with Kremlin spokesman Dmitry Peskov describing it as a “terrorist act” and “completely unacceptable.” Russian foreign minister Sergey Lavrov announced during a meeting with Tajik foreign minister Sirojiddin Muhriddin that the security protocols around the embassy had been enhanced in response to the incident. The two foreign ministers also held a minute of silence remembering the victims, according to Russia’s state-run RT news network.

In the aftermath of the Taliban takeover of Kabul in mid-August 2021, most Western nations closed their embassies, suspending their diplomatic representation in Afghanistan. While Russia has avoided recognition of the Taliban as Afghanistan’s legitimate government, it has sought to build connections with Taliban leaders, including by inviting a delegation to the Saint Petersburg International Economic Forum (SPIEF) in June. Moscow has also left its embassy in Kabul open, continuing to provide consular services to Afghans and Russian nationals remaining within the country.

In the aftermath of the attack, Lavrov claimed that additional Taliban forces, including intelligence officials from the group, had been assigned to increase security around the embassy. The Russian foreign minister added that he “hope[d] that the organizers of this terrorist act and its perpetrators will be punished.”

Afghanistan’s security situation has deteriorated over the past year, due in part to increased activity among ISIS-K militants. Frustrated with the Taliban’s refusal to participate in international terrorism efforts, ISIS-K has launched several high-profile attacks against civilian targets within Afghanistan, undermining the new government’s authority. In mid-August, the group claimed responsibility for a suicide bomb attack against a mosque in Kabul that killed dozens.