In Afghanistan, the Taliban Face an Old Enemy: ISIS-K 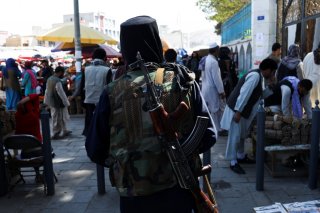 In Jalalabad, a city to the south of Kabul with a significant ISIS-K presence, a series of bombs targeted Taliban vehicles over the weekend, killing eight, including an unclear number of the group’s soldiers and Afghan civilians. Three additional explosions were reported in the city on Monday, although reports of further Taliban casualties could not be confirmed.

The terror group’s campaign against the Taliban, which now maintains undivided control over the entire country for the first time in its history, raises fears of a renewed insurgency. ISIS-K militants include many former members of the Taliban who were attracted to the Islamic State’s global ambitions, as well as many Pakistanis associated with Tehrik-i-Taliban Pakistan, the “Pakistani Taliban.”

ISIS-K is probably better known for a suicide attack against the Hamid Karzai International Airport during the U.S. military evacuation, killing more than a dozen U.S. service members and more than 150 Afghans.

After it seized control of Kabul on August 15, a date commonly thought to have marked the end of the twenty-year War in Afghanistan, the Taliban promised in an early press conference that Afghan soil would no longer be used for terror attacks. For this reason, ISIS-K’s overtly terroristic attacks have put increased pressure on the Taliban to respond forcefully to contain them. The Taliban’s ability to suppress violent activity is also a key test of their early rule, as one of the group’s selling points has been the notion that their takeover represents the end of the forty-year conflict and a return to peace and public safety.

ISIS-K is far from the group’s most significant challenge. The Taliban faces the unenviable task of rebuilding Afghanistan after its four-decade war, preventing an economic crisis, averting famine, and dealing with the country’s shattered health system amid a resurgent COVID-19 outbreak.

To make matters worse, most of the country’s educated elite fled in advance of the Taliban, depriving it of human capital. While some international aid groups have remained in the country, many others have fled, depriving the local economy of aid dollars. While the group has historically relied on the heroin trade to fund it, it also pledged during its conference to eliminate poppy farming in the country, potentially eliminating a valuable source of income.

Against this backdrop, ISIS-K, which numbers only a few thousand fighters, is unlikely to pose a serious threat to the country’s stability, in comparison with the Taliban’s dizzying array of other issues.