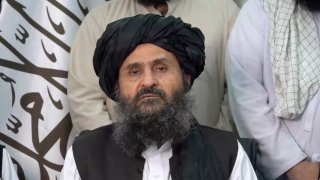 Among other topics the Taliban co-founder and official vice-leader discussed, Baradar stated that the Taliban prioritized development, women and religious minorities would be given freedoms in accordance with Islamic law, and international terrorist groups such as Al Qaeda and ISIS-K would not be allowed to cause destruction abroad.

In the carefully choreographed conference, in which Baradar answered pre-submitted written questions, the Taliban leader also praised the U.S. decision to withdraw from Afghanistan, describing it as a “long and useless war” and stating that the withdrawal was “in the best interests of the American people.” With the U.S. withdrawal, Baradar underlined that foreign troops would be gone from Afghanistan and the nation would once again be sovereign under Taliban rule.

Baradar’s remarks come as the Taliban seeks to portray itself as having moderated its stances from the 1990s, when the group last controlled Afghanistan from 1996 until 2001. That half-decade is widely remembered as a tragic chapter in the country’s history, in which the economy collapsed, political and social freedoms were non-existent, and women and ethnic and religious minorities were singled out for persecution.

More ominously for U.S. national security, the 1990s Taliban played host to Osama bin Laden and Al Qaeda, and the group plotted the September 11 attacks from Afghanistan. While Baradar has repeated that such attacks would not occur again under the group’s new rule, Western observers have noted that ties between the Taliban and Al Qaeda are still strong. Other Taliban officials, including the group’s spokesman, Zabihullah Mujahid, have continued to deny that bin Laden was responsible for 9/11.

Moreover, Baradar’s assertion that the country’s new rulers would not allow terrorism seemed to be undercut after a suicide attack on the Kabul airport, where the U.S. evacuation is underway, killed a dozen U.S. troops and around one hundred Afghans.

The attack has been blamed on ISIS-K, a militant group linked to the largely defeated Islamic State of Iraq and Syria that the Taliban has historically opposed. The Taliban condemned the attack, with spokesman Suhail Shaheen writing in Pashto that the group opposed the targeting of civilians. Interestingly, however, this denunciation did not appear to extend to the targeting of U.S. troops.