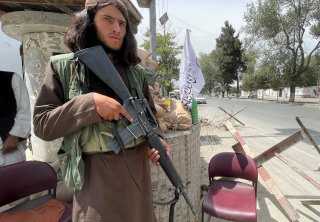 The Taliban has emerged as the undisputed victor of the nineteen-year war against the U.S.- and NATO-supported Afghan government. The group’s most prominent, Zabihullah Mujahid, gave its first press conference on Tuesday, in which he indicated that the Taliban’s stances had moderated and it was open to women’s education and employment.

However, apart from Mujahid, the Taliban’s leadership has remained largely out of the limelight. While its head of state is Amir al-Mu’minin (“Commander of the Faithful”) Haibatullah Akhundzada, in many ways its de facto leader is Abdul Ghani Baradar, an Afghan cleric and militant who was one of the original founders of the Taliban movement in the 1990s.

Baradar’s life is emblematic of Afghanistan’s unceasing wars since the late 1970s. He lived through each war and participated in them. Baradar was born in Afghanistan’s Uruzgan province in 1968, and as a teenager, he fought in the mujahideen against the Soviet Union during Moscow’s occupation of the country. When the Soviet Union withdrew in 1989, Baradar and his brother-in-law, a cleric named Mohammad Omar, established an Islamic madrassa school in Kandahar. The madrassa later became the epicenter of the initial Taliban (“Students”) movement, which Omar led throughout the 1990s and 2000s until his death of natural causes in 2013.

With the support of Pakistan’s Inter-Services Intelligence (ISI) spy agency, the Taliban under Omar quickly seized control of Afghanistan from 1994 to 1996—victories in which Baradar, as Omar’s right-hand man, played a key role in planning. He later served as minister of defense during the group’s five-year control over the country from 1996 until 2001.

Following the U.S. invasion, Baradar played a major role in the insurgency and became a target for the United States. In 2010, the Pakistani government arrested him and held him until 2018, when he was released as a sign of good faith for negotiations during the administration of President Donald Trump. Baradar, who was perceived in Washington as a pragmatist, was subsequently picked to lead negotiations and was the signatory to the group’s February 2020 agreement with the United States. He also led the Taliban’s negotiation with the Afghan government. These negotiations that were aborted in August after the government’s collapse.

Baradar, whose official title is “Deputy Commander of the Faithful,” is expected to return to Afghanistan from Doha imminently.