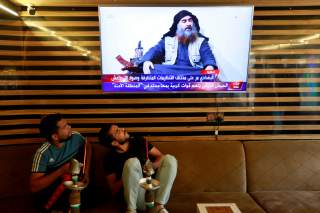 President Donald Trump broke up three weeks of dismal news about Syria with cause for celebration in both America and the Middle East. ISIS (Islamic State) leader Abu Bakr al-Baghdadi was dead after Delta Force commandos cornered him at his northern Syrian lair.

But the location of al-Baghdadi’s death—and the people who had sheltered him—underscored serious questions about Turkey’s role in Syria. Idlib Province, where al-Baghdadi was hiding, is under the control of Syrian rebel groups, many of them Turkish-backed. And al-Baghdadi was finally cornered at a village called Barisha, less than three miles from the border with Turkey.

His location in Barisha had been known for more than three months, according to New York Times reporter Rukmini Callimachi.

Two days after al-Baghdadi's death, U.S. forces and the Kurdish-led Syrian Democratic Forces (SDF) may have carried out additional raids against ISIS figures inside Turkish-controlled parts of Syria. SDF spokesman Mustafa Bali said that “a joint operation with American airdrop...targeted ISIS mercenaries” outside of Jarabulus. Earlier, the Syrian Observatory for Human Rights reported that “unidentified helicopters” had carried out a raid in the area.

Syrian Kurdish diplomat Sinam Mohamad confirmed the report, adding that "[t]hey targeted another ISIS member in Afrin," another Syrian town that Turkish-backed forces captured from the SDF in early 2018.

“There are serious questions that need to be answered concerning how one of the most wanted terrorists in the world was able to stay for months in a safe house so close to Turkey’s border,” said Center for a New American Security fellow Nicholas Heras, who has advised U.S. counterterrorism officials on Syria.

Barisha is not under the direct control of Turkey, but Turkish forces have established several “observation posts” elsewhere in Idlib Province.

“The idea that Al Qaeda or ISIS would be on the ground operating in direct coordination with the Turkish military is completely ridiculous,” said Middle East Institute research fellow Charles Lister. “Their propaganda attacks Turkey most aggressively than any state in the world, apart from perhaps America.”

Two of the most important rebel groups in the region both originated from Al Qaeda affiliate Jabhat al-Nusra. One of the splinter groups, Hurras al-Din, was sheltering al-Baghdadi at a commander’s home. Another, Hayat Tahrir al-Sham, claimed it had been searching for the ISIS leader, and may have connections to Turkish security services.

And the Syrian National Army, which is fighting under Turkish command in the campaign against the SDF, does control parts of Idlib.

“The Syrian National Army is a branch of the Turkey and U.S.-backed Syrian Interim Government . . . which is actually based in Idlib,” explained Heras. “It's also very clear that a number of the fighters that are part of the Syrian National Army are former ISIS, Al Qaeda and Ahrar al-Sham fighters from northeast Syria that left northeast Syria after battles with the YPG and its allies.”

Ahrar al-Sham is another Islamist rebel group, and the YPG is the Kurdish core of the SDF.

On October 6, Trump had ordered U.S. troops out of the way so that Turkish-led forces could clear out the SDF from a border region about seventy-five miles east of Idlib. Turkey and the Syrian National Army have been accused of war crimes, including the use of white phosphorus weapons and the summary execution of unarmed prisoners.

Since then, Russia and the United States have both brokered ceasefires aimed at halting the Turkish offensive, although fighting continues. Russian- and Iranian-backed Syrian forces have moved up to the front lines, where they clashed with the Turkish-led forces, according to both the Rojava Information Center and the Syrian Observatory for Human Rights.

Adding to the confusion, “some” U.S. troops will be moving back to northeast Syria, Sinam Mohamad told the National Interest.

"Coalition troops are partnered with SDF at several bases in Eastern Syria and we continue the mission to defeat ISIS remnants,” said anti-ISIS coalition spokesman Col. Myles B. Caggins III. “We decline to comment on specific locations for operational security purposes."

“The Pentagon is hoping that it can repair some of the damage that was done in the trust between the SDF and the U.S. military,” Heras explained. “This troop movement is not only intended to reassure the SDF that the U.S. is not leaving it behind, it is also intended to send a signal to Russia and [Syrian ruler Bashar] Assad that the United States is not giving Damascus a free pass into the [U.S.-led] Coalition’s zone of control in Syria.”

Even after the October 6 withdrawal, U.S.-SDF cooperation apparently continued. Syrian and Iraqi Kurdish intelligence services helped track Baghdadi to Barisha. Cornered by U.S. special forces, the militant leader grabbed three of his children and exploded a suicide vest on October 26, according to Trump’s speech.

SDF leader Gen. Mazloum “Kobani” Abdi also told Fox News that the SDF had a source inside ISIS who was present at the time of the raid that killed al-Baghdadi.

The next day, Abdi claimed in a statement that a joint SDF-U.S. operation had killed al-Baghdadi’s “right hand man” Abu al-Hassan al-Muhajir near Jarabulus, a Syrian town that has been occupied by Turkish forces since August 2016. A day later, the SDF unveiled its additional operations in Jarabulus and Afrin.

Although the operation against al-Baghdadi was launched out of the Iraqi Kurdish city of Erbil, and Iraqi Kurdish intelligence services were reportedly key to the operation, the Kurdistan Regional Government of Iraq was significantly more quiet about its own role.

“We congratulate the military of the United States and all Coalition partners, forces, and intelligence communities that provided intelligence and support in this operation,” said Iraqi Kurdish diplomat Bayan Sami Abdul Rahman in a statement to the National Interest. ”Kurdistan is a proud member of the Coalition.”

“The operation took place after our military intelligence documented over the past months the presence of high-ranking ISIS leaders including al-Baghdadi in areas under the military control of the Turkish state,” the SDF General Command added in a statement. “We emphasize that this operation was delayed for more than a month due to the Turkish aggression on our region.”

When asked about Sunday and Monday's raids, the U.S.-led counter-ISIS coalition had the same response twice.

“We are aware of SDF reports. The coalition supports all efforts to disrupt and defeat ISIS senior leadership,” wrote a counter-ISIS coalition spokesperson, both times. “For reasons of operational security, we have no additional comments.”

This story has been updated to reflect additional information about the raids in Jarabulus and Afrin, and the counter-ISIS coalition's response.