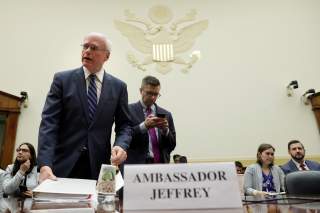 State Department officials and Syrian-Kurdish diplomats described to lawmakers contradicting accounts of the months leading up to President Donald Trump’s decision to give Turkey a green light to attack the Syrian-Kurds.

Officials on both sides of the U.S.-Kurdish relationship aired different versions of events during back-to-back hearings on Capitol Hill. Ambassador James Jeffrey, who oversees anti-ISIS operations for the Trump administration, downplayed the extent of the Turkish attack—and the Trump administration’s role in giving Turkey permission to steamroll its neighbors. But the Kurdish-led Syrian Democratic Forces say they received a different message from Jeffrey’s team in the months leading up to the withdrawal.

Ahmed, executive president of the SDF’s political wing, told the House Oversight Committee that “we received promises from America.” Ahmed claimed that the U.S. team had told her that U.S. forces would stay in Syria until the defeat of ISIS and a political solution to the Syrian Civil War.

“We didn't expect them to fight on our behalf, but we thought they wouldn't allow [an attack],” Ahmed said. “Even one day before [the] attack, we were under the assumption that the airspace was going to be closed.”

“I know of no decision at any point in either administration to use military force to deter Turkey from going into the northeast,” Jeffrey claimed when he addressed the House Foreign Affairs Committee. “We never communicated to Turkey that we would use military force to stop them from moving across their border.”

“It’s possible that America was not there for the protection of the Kurds,” Ahmed later told the National Interest. “But America could have not allowed another country to launch an attack.”

This is not Turkey’s first foray into Syria. In late 2016 and early 2017, Turkish forces pushed ISIS out of border towns of al-Bab and Jarabulus, installing other rebel groups in its place. In early 2018, Turkish forces pushed the SDF out of the town of Afrin, displacing 137,000 out of 287,000 inhabitants. Jeffrey denied allegations that Turkey was conducting “large-scale ethnic cleansing” this time around. Over the past several days, there have been a few reported war crimes, he said. Meanwhile, Ahmed described in her testimony “grave human rights violations.”

Under a “security mechanism” negotiated by Jeffrey’s team, the SDF had agreed to destroy its fortifications along the Turkish border and allow joint U.S.-Turkish patrols on its soil, in exchange for protection from a further Turkish attack.

“Those troops were not there to protect the Kurds from the Turks,” Jeffrey said, referring to U.S. troops that Trump moved away from the border after an October 6 phone call with Turkish president Recep Tayyip Erdoğan. “The purpose of the president’s phone call was to dissuade [Erdoğan] from something in the days past we had become convinced was no longer a possibility but a probability.”

Jeffrey claimed that Turkey did not see U.S. forces as a deterrent. But when pressed, he confessed to Rep. Brad Sherman (D-CA) that Turkey would “absolutely not” kill American troops in Syria. He also tried to minimize his role in the decisionmaking process.

“I have never briefed the president,” Jeffrey said.

“Between the fourth and the sixth [of October], I had at least one conversation with [Secretary of State Mike] Pompeo,” he continued. “Secretary Pompeo has been consulted very, very frequently, almost daily by the president on Syria issues.”

“The SDF has long had relations with Russia and the Assad government,” Jeffrey claimed. “We also never told them that we couldn’t.”

But the U.S. government had reportedly blocked an agreement between the SDF and Bashar al-Assad prior to the withdrawal of U.S. troops from the region.

The National Interest reported yesterday that Jeffrey had slowed efforts by the State Department to condemn the murder of Syrian Kurdish politician Hevrin Khalaf by Turkish-backed paramilitaries.

For the first time in public, Jeffrey addressed accusations that Turkish forces had used white phosphorus, an incendiary chemical, on civilian areas. Lawmakers noted that they had received no notice from the Trump administration on the alleged use of chemical weapons.

“I haven’t heard anything about that [from the State Department] other than here,” Rep. Chrissy Houlahan (D–MD) pointed out.

So, Jeffrey changed the subject to alleged war crimes by Bashar al-Assad, the Iranian- and Russian-backed ruler of the Syrian central government.

“We see dozens of [war crimes] a day” in areas under attack by Assad, Jeffrey claimed. He called Assad’s violence against civilians a “deliberate policy” rather than “ill-discipline,” which he accused Turkish-led forces of exercising. Prior to directing attention to Syria’s crimes, Jeffrey had referred to “Turkey unleashing ill-disciplined opposition militias.”

“The role of the U.S. military is to protect U.S. interests, not to be a unilateral nation-builder and support an insurgency against a NATO ally,” Hice said, referring to the Kurdish component of the SDF as “a splinter group of the PKK, a U.S. and Turkey registered foreign terrorist organization.”

“We learned from President [Barack] Obama’s reckless retreat from Iraq that power vacuums are exploited by America's worst enemies,” said Foreign Relations Committee Ranking Member Rep. Michael McCaul (R–TX). “How will we prevent Assad from expanding his war against the Syrian people to northeast Syria?”

Jeffrey responded that U.S. policy continues to be to defeat ISIS, remove Iranian troops from Syria, and establish a democratic system of government in Syria. He said that Assad, Islamists, and “an ideological state on the march, that is Iran, that has dug in in Syria and threatened . . . Syria’s neighbors, including Israel” are the greatest threats to U.S. interests. That’s why the Trump administration is reportedly floating plans to build a counter-Iran force, apart from the Syrian Kurds, in other SDF-controlled area.

“Our policy in Syria has been placing pressure on Iran in various ways,” Jeffrey added. “I can’t talk about them here, but they’re fairly significant.”

Matthew Petti is a national security reporter at theNational Interest and a former Foreign Language Area Studies Fellow at Columbia University. His work has appeared in Reason and America Magazine.