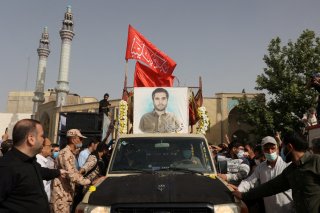 Israeli officials informed their American counterparts on Wednesday that Israel was responsible for the assassination of Col. Hassan Sayad Khodayari, an officer in Iran’s Islamic Revolutionary Guard Corps (IRGC) who was shot to death in Tehran on Sunday, according to the New York Times.

The Israeli officials acknowledged that two Israeli agents had carried out the attack, although they did not comment on whether those agents were Israelis or Iranians opposed to the government of Supreme Leader Ali Khamenei. Khodayari’s two assailants escaped from the scene on a motorcycle, and Iranian authorities indicated later in the week that Tehran’s police were conducting a city-wide manhunt.

In justifying the assassination, Israeli officials claimed that Khodayari had served as deputy commander of Unit 840 of the IRGC’s Quds Force, responsible for the Islamic Republic’s external operations. Unit 840 is reportedly involved in foreign terrorist attacks, and the officials implicated Khodayari in a number of plots against Israeli diplomats abroad, including an unsuccessful 2012 attempt to kill Israelis in Bangkok that led to the deaths of five bystanders. Khodayari was also accused of masterminding separate bombing incidents in New Delhi, where an explosion injured an Israeli diplomat’s wife, and Tbilisi, where a bomb on an Israeli consular vehicle was defused before it could explode. Unit 840 has also reportedly been involved in assassination attempts against Israeli and Western officials in Europe, South America, and the Middle East.

Iran has denied the existence of Unit 840, and the IRGC described Khodayari’s assassination as a “criminal terrorist act.”

After the news broke of Israel’s admission of involvement, Israeli officials reportedly expressed anger that their comments to American officials had been leaked to the press. Tel Aviv has reportedly requested an explanation from the U.S. government of how the information was made public, as the leaker is presumed to be an American. The Jerusalem Post warned that Israelis abroad could face additional hostility after Tel Aviv’s involvement in the bombings became known.

Israel is known to conduct assassinations against perceived threats to its security as part of its foreign policy. Israeli operatives are thought to have killed five Iranian nuclear scientists between 2010 and 2012. In November 2020, Israeli agents assassinated Mohsen Fakhrizadeh, an eminent Iranian atomic scientist widely described as the head of Iran’s nuclear program. Iran condemned Fakhrizadeh’s killing as an act of “state terror,” and many Western officials, including former CIA Director John Brennan, characterized it as a violation of international law.