Israel Fends Off Apartheid Charges From Palestine at UN 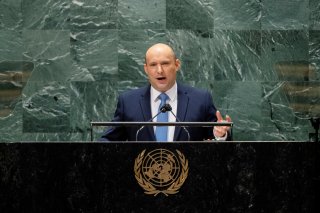 Gilad Erdan, Israel’s ambassador to the United Nations, angrily responded to the ambassador of the Palestinian Authority, who described Israel’s policies in the West Bank and the Gaza Strip as “apartheid” and wore a face mask labeled “Stop Apartheid.”

In his remarks, Erdan noted that Thursday would have marked the sixth birthday of Ido Avigal, an Israeli boy who was killed by a Hamas rocket in May 2021 during the most recent period of heightened violence in the Gaza Strip.

Erdan described the UN’s report on “Operation Guardian of the Walls,” Israel’s military campaign against Hamas in May 2021, as biased against Israel. The UN ambassador suggested that the report had not sufficiently considered the motivations of Hamas in the attacks, noting that the group’s expressly stated purpose is to kill as many Israeli citizens as possible.

“You can see the campaign that started here today on the mask of my counterpart,” Erdan said. “But make no mistake. This is a joint campaign between these organizations and the Palestinians … with the mission of delegitimizing Israel as a Jewish democratic state.”

To refute the charges of apartheid, Erdan cited Israel’s strides toward political and social equality of all its citizens, including both Jews and non-Jews of all social and ethnic backgrounds. Erdan also suggested that Arabs within Israel enjoy far greater political rights than they do in neighboring Arab countries. The Israeli ambassador pointed to the fact that Palestinians have served as ministers and members of parliament within Israel, which he argued would be unthinkable if Israel truly implemented an “apartheid” system.

Opponents of Israeli policies in the West Bank typically cite Israel’s division of the area into three distinct categories: those run by the Israeli government, those run in some respects by Israel and in others by the Palestinians, and those run exclusively by the Palestinian Authority.

In practice, the first and third categories overlap with areas where Palestinians and Israelis are respectively not allowed to live. This has elicited some comparisons to apartheid-era South Africa’s “Bantustan strategy ” of relegating black South Africans to unproductive and undesirable land.