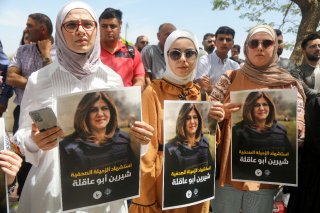 Back in May, Al Jazeera reporter Shireen Abu Akleh, a Palestinian-American, was killed while covering an Israeli raid on a refugee camp in the West Bank. Since then, the circumstances of her death have become a point of international contention.

Now, an Israeli Army report has concluded there is a “high possibility” that Abu Akleh was killed by an Israeli soldier. The report, however, stopped well short of calling the killing intentional, and the Israel Defense Forces (IDF) announced that there will be no criminal charges in the matter.

“[I]t appears that it is not possible to unequivocally determine the source of the gunfire which hit and killed Ms. Abu Akleh,” the report said, per CNN. “However, there is a high possibility that Ms. Abu Akleh was accidentally hit by IDF gunfire fired toward suspects identified as armed Palestinian gunmen during an exchange of fire,” the IDF said.

“After a comprehensive examination of the incident, and based on all the findings presented, the Military Advocate General determined that under the circumstances of the incident, despite the dire result—the death of Ms. Abu Akleh and Mr. Samudi’s injury—there was no suspicion of a criminal offense that warrants the opening of an MPCID investigation,” the IDF’s Military Advocate General’s Office said.

“Al Jazeera denounces the Israeli occupation army’s lack of frank recognition of its crime. The network calls for an independent international party to investigate the crime of the assassination of Shireen Abu Akleh, in order to accomplish justice for Shireen, her family and fellow journalists around the world,” the network said.

Back in July, the U.S. State Department reached a similar conclusion.

“After an extremely detailed forensic analysis, independent, third-party examiners, as part of a process overseen by the U.S. Security Coordinator (USSC), could not reach a definitive conclusion regarding the origin of the bullet that killed Palestinian-American journalist Shireen Abu Akleh,” the State Department report claimed. “Ballistic experts determined the bullet was badly damaged, which prevented a clear conclusion… in addition to the forensic and ballistic analysis, the USSC was granted full access to both Israel Defense Forces (IDF) and Palestinian Authority (PA) investigations over the last several weeks. By summarizing both investigations, the USSC concluded that gunfire from IDF positions was likely responsible for the death of Shireen Abu Akleh.”