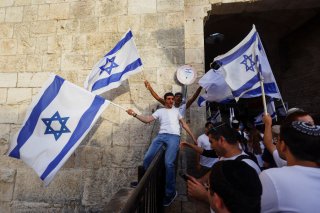 Israeli prime minister Naftali Bennett voiced his support on Monday for the annual Jerusalem Day march, which commemorates Israel’s capture of the city in its entirety in June 1967—a march that has in recent years become strongly affiliated with Israel’s Far Right and with anti-Arab racism.

During the march, which took place on Sunday, thousands of police were deployed in Jerusalem to keep Israeli marchers separate from Palestinians in the neighborhoods they marched through. As part of the procession, Jerusalem Day celebrants normally pass through the Muslim Quarter, a predominantly Muslim neighborhood in Jerusalem’s Old City, en route to the Temple Mount. On Sunday, as in previous iterations of the march, police were unsuccessful at preventing clashes between Israeli marchers and Palestinian locals—many of which appeared to be provoked by Israelis chanting “death to Arabs” and other racist slogans. The Palestinian Red Crescent later claimed that sixty-two Palestinians had been injured during the march, of whom twenty-three were hospitalized. Footage from the event, particularly a clip of an Israeli marcher attacking a Palestinian woman, was widely circulated on social media, leading to a firestorm of criticism towards the marchers.

Although Bennett denounced far-right extremism in his remarks, he claimed that it had been necessary to hold the march in order to spite Hamas, which had threatened reprisals against Israel if it was not canceled. In May 2021, on the day that that year’s march was scheduled to take place, Hamas launched a series of rockets from Gaza into Israel, prompting an eleven-day military conflict.

“If we hadn’t done it [this year] … we would—in effect—never go back to it,” Bennett said, suggesting that canceling the march over fears of violence from Hamas or other Palestinian groups would represent a “retreat of sovereignty” for Israel.

The Israeli prime minister underlined that most of the marchers were not violent, and that “those who celebrated yesterday did so in a very special, heart-lifting way.” Noting that some marchers did not remain peaceful, however, he claimed that the Israeli government would “deal with [them] to the fullest extent of the law.”

Bennett also praised the preparation of Israeli police, who he argued had acted professionally and fairly throughout the event, although some observers noted that the majority of those arrested for the disturbances appeared to be Palestinians rather than Israeli marchers.