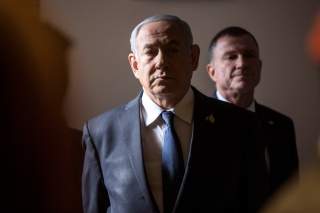 Prime Minister Benjamin Netanyahu, the undefeated heavyweight champion of Israeli politics for at least a decade, has just taken a serious blow in do-over elections. But it’s not clear yet whether that was a knockout punch—or whether “Bibi” can get back up and keep swinging.

Results released by the Israeli elections authority early Wednesday afternoon showed that Netanyahu’s right-wing alliance won fifty-four seats in parliament, short of the sixty-one-seat majority needed to stay in power. But there’s no clear replacement among the opposition.

“It feels like nobody won the election, but somebody lost,” said former U.S. Ambassador Dan Shapiro, calling from Tel Aviv. “Netanyahu clearly did not succeed in getting the mandate he wanted from the public.”

Israel’s multi-party parliamentary system forces parties to combine votes to elect a new prime minister and cabinet. The next few weeks are expected to see a flurry of dealmaking.

It’s a race against the clock before Netanyahu’s preliminary hearing for corruption charges in two weeks. Netanyahu will either cement his legacy as Israel’s longest-serving prime minister or fall out of power just as several simultaneous criminal allegations catch up to him.

As Rachel Broyde, spokesman for the ruling Likud Party, told the National Interest late Tuesday night: “We just have to wait and see.”

It’s not clear whether Netanyahu’s leading rival, retired Gen. Benny Gantz, can herd together enough support to lead a new government. And Netanyahu could still pick up a few more votes—either by wooing back the nine seats held by Avigdor Lieberman’s secular nationalist Yisrael Beiteinu party, or by winning over the six seats held by the center-left Labor-Gesher in a surprise deal.

Aluf Benn, editor-in-chief of Ha'aretz, told the National Interest that Netanyahu could offer Labor-Gesher cabinet positions, or even nominate its leader to the ceremonial presidency of Israel once the current president retires.

Lieberman and Gantz are demanding a unity government deal, in which the Likud would dump Netanyahu and nominate a compromise candidate.

“I would think it's the most likely [outcome], except Netanyahu is such a master of politics. He was able to pull wild cards in the past, so I think if anyone is capable of staying in power, it's him,” said Israeli academic Elizabeth Tsurkov, a fellow at the Foreign Policy Research Institute. “It's a matter not just of political survival but also of avoiding prison time. So, he'll pull out all the stops.”

Adding to the sense that he is a defeated man, Netanyahu cancelled his appearance at the United Nations General Assembly next week.

Harry Reis, director of policy and strategy at the New Israel Fund, said that he could see Netanyahu agreeing to step down from the Likud in a plea deal with prosecutors.

Gantz’s centrist Blue and White Party has thirty-two seats. Support from the Left brings the Gantz coalition to fifty-five seats. Without backing from Lieberman or a unity government, he would need support from one of the Orthodox Jewish parties or even Ayelet Shaked, a protégée-turned-rival of Netanyahu whose breakaway far-right party now controls seven seats.

The outcome could be weirder yet. Shapiro speculated that Lieberman and Netanyahu could agree to share the leadership, rotating the office of prime minister between themselves.

Or the country could hold another round of elections.

When elections were last held in April, the right-wing majority fell apart due to infighting. The avowedly-secular Lieberman feuded with the religious parties, and Netanyahu demanded immunity from his ongoing corruption investigation into his family. But the Center and the Left simply didn’t have the votes to push an alternative candidate, allowing Netanyahu to force the first do-over election in Israeli history.

“The only person who has really made out well as a result, just looking from the overall picture, is Avigdor Lieberman,” said Matt Brodsky, a senior fellow at the Gold Institute for International Strategy. “He’s the one who’s now increased his seats from five to eight seats, and he apparently gets to sit in a position of being a kingmaker.”

“His viewpoint had always been that we allow these small religious parties to have far too much influence on the Right, because they’re included in a right-wing coalition,” Brodsky told the National Interest. “Yet, what he managed to do is put himself, now, in that position, where he will by far have outsized influence.”

Another unexpected sector of Israeli society managed to punch above its weight.

At the beginning of the state, Israel gave citizenship to Arabs living within its borders. After expanding its territory in a 1967 war, Israel offered a path to citizenship for Palestinians in Jerusalem. Arab and Palestinian citizens of the state now make up 21 percent of the Israeli electorate.

Netanyahu had played on fears of an “Arab-leftist” government to rally nationalist support. That phrase appeared on ads that the Likud purchased in the pages of weekly Torah readings handed out in synagogues across Israel.

When a get-out-the-vote campaign supported by the New Israel Fund offered free transportation to poor rural Arab voters, the Likud successfully sued to shut down the program.

“The voter suppression tactics was part of a fearmongering strategy that allowed Benjamin Netanyahu to go to his base and warn of high Arab voter turnout, as if Arabs exercising the right to vote was somehow a threat to Israelis, rather than every Israeli exercising their civic duty,” Reis told the National Interest. “We are a stand-in for liberal democracy in Israel, and a convenient punching-bag for the populist right.”

As much as it may have galvanized right-wing support, Netanyahu’s tactics also hardened the opposition to his campaign.

When the Likud attempted to pass a last-minute law to allow it to videotape voting stations, claiming it was to prevent Arab voter fraud, Lieberman denounced “Netanyahu’s personal militia” and accused the Prime Minister of pushing “an election-stealing bill.”

With less than a week before the polls, Facebook briefly banned Netanyahu’s campaign chatbot for sending all visitors the message “Arabs want to annihilate us all—women, children and men!” The Likud blamed the message on a low-level staffer, but the damage was done.

“Netanyahu is a psychopath with no red lines and wants to see blood,” warned Ayman Odeh, head of the Joint List. His party, a conglomerate of Arab and far-left parties, catapulted to third place yesterday, now holding fifteen seats.

“The one positive outcome of the election is that that strategy didn’t pay off, and the Likud Party’s racist campaign of voter suppression backfired, and instead of diminishing Arab turnout, led to a much higher level of Arab voter turnout,” Reis added.

The embattled prime minister took the rise of the Joint List as an opportunity to double down.

“In the coming days we will convene negotiations to assemble a strong Zionist government and to prevent a dangerous anti-Zionist government,” he said on the morning after elections, warning against Arab leaders who “negate the existence of Israel as a Jewish and democratic state” and “glorify bloodthirsty murderers.”

If the Joint List ends up as the largest opposition party, then Odeh will automatically become leader of the official opposition, until other opposition parties vote him out. This office, which has never been held by an Arab before, would entitle Odeh to receive intelligence briefings and meet with foreign delegations as an official representative.

“In either case, this promises to provide them with a more significant role in the Israeli political scene,” added Darawshe, who now runs the Center for Shared Society at the Givat Haviva Institute. “But to do that, they need to maintain their internal unity and not sink into secondary internal battles as they did in the previous [parliament], and this is not guaranteed.”

According to Darawshe, the Joint List will demand “social-economic demands, plus cancellation of the nation-state law, and other discriminatory laws, as well as [the] restart of the negotiations with the Palestinians.”

The nation-state law, passed in 2018, states that “the right to exercise national self-determination in the State of Israel is unique to the Jewish people” and downgrades the official status of the Arabic language.

Negotiations have stalled with the semi-autonomous Palestinian leadership over the status of the Palestinian territories, which Israel captured in a 1967 war.

During the campaign, Netanyahu promised to permanently annex part of the territories, which would end prospects for a viable Palestinian state. According to a report in Ha’aretz, Netanyahu had also planned to delay the election by launching harsh retaliation against the unrecognized Palestinian statelet in Gaza for a cross-border rocket attack that disrupted a campaign rally.

Gantz, who was Netanyahu’s military chief of staff during the last war between Israel and Gaza, has supported a plan to hold onto Israeli settlements in the Palestinian territories. But Shapiro suggested that Gantz could ultimately be better for a peace settlement.