Know This: A U.S.-Iran War Would Not Be Fought Only in Iran 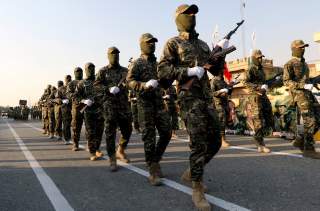 The rocket attacks, between the attack on two oil tankers on June 13 and the downing of the Global Hawk drone, formed part of a pattern of apparent threats to the United States in the Middle East. What they indicate is that any conflict with Iran could involve clashes in Iraq. The United States has already designated several large Iranian-backed Shia paramilitaries as terrorist groups in Iraq, such as Harakat Hezbollah al-Nujaba and Asaib Ahl al-Haq. These paramilitaries have been an official part of the Iraqi Security Forces since 2018. Press TV in Iran reported on July 2 that these militias are being increasingly integrated into the Iraqi armed forces. Iran has even proposed working with Iraq on air defense and conducting joint military drills with Baghdad. This creates a complex web of forces linked to Iran’s IRGC and also the Iraqi government. If one of those groups was involved in the drone attack on Saudi Arabia or rocket attacks near U.S. forces, that paints a disturbing picture of worse to come in Iraq if tensions escalate.

From Iraq, the arc of contact between the United States and Iran is in the Gulf of Oman. Six oil tankers were sabotaged between May 12 and June 13. A sophisticated Navy Broad Area Maritime Surveillance Demonstrator U.S. drone was shot down on June 20. The United States has blamed Iran for all these incidents. U.S. airstrikes that would have targeted Iran in retaliation for the downing of the drone were subsequently called off, but F-22 raptors were sent to the Gulf at the end of the month to bolster B-52s and other U.S. naval and air force assets.

Across the Gulf of Oman in Yemen, Iranian-backed Houthi rebels have been fighting a Saudi Arabia-led alliance since 2015. Since the May incidents with Iran, the Houthis have increased their drone and cruise missile attacks on Saudi Arabia. An examination of the number of publicly known attacks reveals that they began in earnest on May 15 and continued unabated to the end of June. This included at least seven days of attacks directed at Abha city in southern Saudi Arabia and four days of attacks on Jizan. Iranian media has highlighted these attacks on airports, an indication of how they play into Tehran’s regional views.

Iran sees its role in Yemen, Iraq, Syria and Lebanon, as well as its confrontation with the United States and U.S. allies, as an interlinked policy. Tehran works in a classic Clausewitzian manner in this regard, blending military and political goals alongside economic and cultural initiatives. For instance, on July 2 Iran’s Tasnim News reported a new series of agreements between Iran, Iraq and Syria to facilitate a road network and trade between the three countries.

The United States also understands that its policies regarding Iran have ramifications in Syria, Lebanon, Iraq, and other countries. During the buildup to the Iran deal there was acknowledgement that policies on Hezbollah and also in Syria were linked to the desire for the deal. Iran’s threats to close the Strait of Hormuz, made in April, appear linked to the attacks on the oil tankers in May and June. The tanker attacks were part of a buildup that included the drone raid on Saudi oil installations on May 14 and the rocket attacks in Iraq on May 19 and in mid-June. The theater of operations of these attacks is massive, and if one includes the Israeli airstrikes on Syria it is an arc of simmering conflict stretching thousands of miles.

While a direct U.S.-Iran conflict has not broken out, there are already conflicts taking place between allies and proxies. This includes Israel’s attempts to prevent Iranian entrenchment in Syria and also the conflict between the Houthis and the Saudi-led alliance. It is best to understand the Middle East through this paradigm today. This means looking at the Middle East as a series of interlinked confrontations between the United States and its allies, and Iran and its allies and proxies. Washington has indicated that it views Iran as responsible for its proxies’ behavior and its designation of the IRGC as an FTO was part of the Trump administration’s attempt to draw these links into the open. Even if the administration subsequently seeks to change course, or a future administration seeks to return to the Iran deal, it will be necessary to manage all of the tensions from Lebanon to Yemen as part of any Iranian policy.