The Kurdish Road to Peace in Syria Ends in Damascus 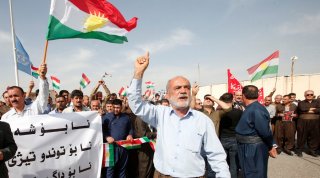 With the Syrian Arab Army emerging increasingly victorious over its foes, internal and external actors are left with fewer and fewer options. With other non-state actors largely out of the picture, the Kurdish-led forces are now forced to decide how they will align. Though their ties with the United States are still strong, the only stable long-term solution for Syria’s Kurds is a rapprochement with the Syrian government.

Over the course of the nine-year-long conflict, an array of Kurdish and Kurdish-dominated bodies have emerged in Syrian territory along the Turkish border. At the forefront are the Kurdish-dominated Syrian Democratic Forces, the military force of the self-declared Autonomous Administration of North and East Syria. The multiparty assembly known as the Syrian Democratic Council, to which the Syrian Democratic Forces answer, is the foundation for the region’s political institutions and leads negotiations with the Syrian government. Rather than operating as a conventional military force, the Syrian Democratic Forces consist of a coalition of ethnic militias, with the People’s Protection Units being the most prominent. Though predominantly Kurdish, the People’s Protection Units and their auxiliaries are increasingly becoming more polyethnic following offensives outside of traditionally Kurdish areas (although this process has not been without difficulty and tensions).

These intertwined groups have largely been successful at balancing their seemingly contradictory relationships: While receiving weapons from the United States, they have been negotiating with Russia. This seemingly strange situation has largely been the consequence of geography. Following the Syrian Arab Army’s withdrawal from northern Syria in the early stages of the war, and with fighting largely concentrated in other parts of the country, neither the Syrian Kurds nor Damascus have been compelled to address the inherent paradox in their tacit alliance against jihadist rebels such as the Islamic State, the al-Nusra Front, and Salafi groups attached to the Free Syrian Army.

This non-conflict has at times manifested itself in various forms of active assistance. In the final stages of the Battle of Aleppo in 2016, while the United States and its allies were condemning the Syrian government’s offensive to retake the rebel-controlled portions of the city, the People’s Protection Units were busy playing their part by cutting off crucial supply routes for the rebels. Conversely, as Turkey’s President Recep Tayyip Erdogan initiated an invasion of northern Syria, Damascus deployed government-aligned militias to Afrin. The parallels between the two political authorities extend beyond the field of combat. Key in any post-war Syria will be the preservation of the country’s history of secularism, an objective explicitly stated by President Bashar al-Assad and mirrored by the Syrian Democratic Forces.

Its current status as a parastate leaves the Kurdish-led polity in a difficult situation: It has all the burdens of an actual state while lacking the territorial integrity and sovereignty that come with formal statehood. As long as Rojava continues to operate as an independent actor, Turkey will remain restless. Consequently, the only meaningful short-term protection that can be offered to northern Syria, in the absence of the Syrian state, will be under the guise of international brokering—such as the Russo-Turkish agreement in October 2019, which resulted in the withdrawal of Kurdish forces from the Syrian-Turkish border and thereby their survival by the grace of others.

Shortly afterward, Syrian Kurdish forces and the Syrian government reached an agreement, brokered by Russia, that resulted in active military cooperation. Implicit here is the understanding that only the Syrian state can offer any long-term support, whereas countries like the United States or the United Kingdom cannot be wholly relied upon. Joint governance, however, is not a sustainable solution. With the government unlikely to yield exclusive domains to the Syrian Democratic Forces, and with the latter lacking the strength to seize such domains on its own, a negotiated settlement will be required. Should the Kurdish forces not be open to this, Damascus could always turn to Ankara as a last resort to increase pressure.

The Kremlin has been eager to accommodate the Syrian Democratic Forces as part of a political settlement for Syria. In February 2016, a Syrian Kurdish representative office was opened in Moscow. The following year, a Russian-proposed draft constitution for Syria sought to establish an official status for the Kurdish language while simultaneously seeking to create a “decentralized Syria.” Russia has advocated for the inclusion of the Syrian Democratic Forces not only in the United Nations-led Geneva peace talks but also in parallel efforts such as those in Sochi.

However, the Russian government’s objective has been to reconcile the Syrian government with Kurdish forces, not simply to ally with both. Friendly and strategic Russo-Syrian relations predate the presidencies of Vladimir Putin and Assad by decades and are centered around the existence of strong, centralized states. Following Moscow’s intervention in Syria in late 2015, Russia began engaging in a multiyear project of not just rebuilding the Syrian Arab Army but also integrating semi-autonomous militias, a move that they will likely wish to see repeated in the north of the country. Given the signing of a forty-nine-year lease deal for Russian bases in Syria and the expansion of existing ones, along with ongoing negotiations about building more, the Kremlin will not want to see a weakened government and therefore will push for further command and governance integration under a Damascus-led government with long-term incentives to make that happen.

Yet here lies a cause for resistance from the Kurdish leadership. With no sign of the Syrian government abandoning its pursuit of an integrated command structure, the People’s Protection Units will either be forced to disarm or, more likely, be assimilated into Syrian Arab Army units. Once such a path is followed, the primary source of leverage enjoyed by the Syrian Democratic Forces — military strength — will largely disappear. So far, this has largely been a dealbreaker for the Syrian Democratic Forces, with Jihat Omar, co-chair of the Foreign Relations Office of the Syrian Democratic Council, having asked rhetorically, “without defense forces, how should we be able to protect our people and our political vision?”

This remains primarily a question of command. The Syrian government has proven itself willing to reintegrate those who were not explicitly against it. In an October 2018 decree, Assad granted amnesty to deserters and draft dodgers who did not join rebel forces. As such, should Damascus gain greater direct control of northern Syria, some fighters might choose to hedge their bets in case the Syrian Democratic Forces cease to be a de facto independent authority in the region—leaving the issue of whether or not Kurdish commanders will be quick to join the Syrian Arab Army.

The government’s path to victory, however, may prove to its detriment when it comes to winning hearts and minds. The reputation of the state’s security apparatus not only precedes it but also is likely to inspire both fear and opposition to northern Syria’s complete reincorporation. In light of the October 2019 deal, local journalists highlighted concerns about the return of intelligence services to Rojava. Sameyyan, the pseudonym of a Kurdish journalist in northeastern Hasakah province, went so far as to say, “If the Syrian government comes back as it was before, its security apparatus and such, I will certainly leave.” While most inhabitants are unlikely to leave, in the case of a final Kurdish-Damascus settlement, rogue elements opposed to any such deal could emerge—and this could result in an intensification of the conflict in areas that are currently mostly peaceful. If Syrian Democratic Forces dissidents choose to engage in armed confrontation, the Syrian government is likely to revert to similar tactics to those it has pursued successfully throughout the rest of the country, which risks bifurcating society in Rojava and strengthening anti-government segments of the population.

Without the backing of a strong, central state, the Kurdish population is likely to be exposed to continued foreign aggression. In neighboring Iraq, recent incursions by Turkish military forces have resulted not only in the deaths of combatants of the Kurdistan Workers’ Party but also in the killing of two Iraqi border guards. Baghdad’s impotence is itself a product of the schism between the Kurdistan Regional Government and the Iraqi government, which has resulted in a weakened state.

Territorial integrity can only be actualized through the economic integration of Syria’s various provinces. While some Gulf states have been reestablishing ties with Damascus and are eager to be among early investors in reconstruction efforts, the continued closeness between the Syrian Democratic Forces and the United States is likely to set back not only the former but all of Syria. The decision of the Syrian Democratic Forces to sign an oil deal with an American firm, which is likely motivated by short-term financial needs, has already produced tensions with the Syrian government, which has condemned “in the strongest terms the agreement signed between al-Qasd militia [Syrian government’s name for the Syrian Democratic Forces] and an American oil company to steal Syria's oil under the sponsorship and support of the American administration.” Though the deal might provide the Kurdish forces with what President Donald Trump referred to as “some cash flow,” it will make the Syrian Democratic Forces financially, and consequently politically, dependent on the United States while being cut off from the rest of the country and likely from the rest of the region. Should a complete political reconciliation take place, it would not be surprising were the Syrian Democratic Council to be forced to forfeit any assets abroad as a result of U.S. sanctions on Syria, which have only intensified in recent weeks and months.