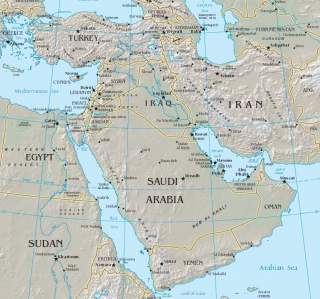 Editor’s Note: The National Interest has always stood for publishing a variety of perspectives on the most pressing international security and foreign policy challenges of the day as well as doing all we can to present all sides of a debate. Keeping with that mantra, we offer the following response to a recent piece in our publication authored by Alireza Miryousefi, Ph.D., Minister & Head of Media Office at the Mission of the Islamic Republic of Iran to the United Nations.

The title alone—use of the word “colonization”—is wrong and against known historical facts: what your author refers to as “Arabistan” and what in reality is Khuzestan, has always been a part of Iran, its people are Iranian, and they always will be.

A quick look at any map, going all the way back to ancient times and drawn by the Greeks or Romans, shows that to be a fact.

There is no Iranian colonization in any part of Iran, and our Iranian ethnic Arabs would agree. The fact that foreign or colonial powers have tried to dismantle Iran by provoking separatist sentiments in some parts of Iran where there are ethnic minorities is no secret. It is also a fact that these sentiments are always agitated by enemies of Iran from the outside, as evidenced by this very article which is written by the grandson of an infamous early 20th Century separatist from Khuzestan. (Had you mentioned that the author's grandfather, Sheikh Khaz’al, was a separatist, your readers might have had an inkling that the author is not an unbiased or neutral observer, but in fact has an agenda and is agitating against Iran's sovereignty.)

Iran is a multi-ethnic nation with a history that goes back millennia. In fact, as the world’s first nation state, ethnic diversity is in Iran’s DNA. While (provoked) separatist attitudes can be seen everywhere—certainly in Europe as evidenced in its recent post-communist past—agitating for separatism in Iran and in other countries in the region will only undermine stability and security in the entire region.

The media, and in particular your distinguished magazine, should not, in our opinion, even implicitly encourage secession. We strongly oppose this approach, and expect your magazine to take the necessary steps to prevent the publishing of such dangerous provocations in the future.

Alireza Miryousefi, Ph.D., is the Minister & Head of Media Office at the Mission of the Islamic Republic of Iran to the United Nations. He can be reached at [email protected]. Follow him on Twitter @miryousefi.