The Long Game for Iranian Democracy 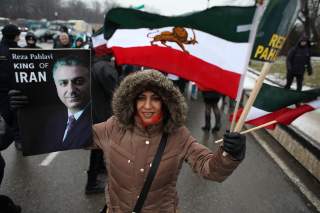 In early September, a twenty-nine-year-old Iranian soccer fan named Sahar Khodayari set herself on fire in front of a courthouse in Tehran in a dramatic display of defiance against regime authorities. Khodayari had been arrested this spring for defying an official ban on female attendance at public sporting events—a violation that left her facing six months behind bars. Khodayari subsequently succumbed to her injuries, but her public act of protest succeeded in breathing new life into the political ferment that has buffeted Iran for the past year-and-a-half.

Since December of 2017, Iran has experienced the longest sustained period of unrest in four decades of clerical rule. Through recurring rallies, public marches, labor strikes and other forms of protest, Iranians throughout the country have regularly organized in opposition to the social malaise, economic decline and glaring official corruption that has come to characterize life under the ayatollahs. These protests, moreover, have persisted despite intensifying regime pressure. For activists like Mariam Memarsadeghi, this resilience is a hopeful sign that—after forty years of draconian religious rule—real, meaningful change may in fact be possible in Iran.

It is a goal that the forty-seven-year-old Iranian-American human-rights campaigner has been working toward for decades. Memarsadeghi, who previously headed the Middle East/North Africa portfolio at pro-democracy NGO Freedom House, launched her current initiative, Tavaana, in 2010 with seed money from the U.S. Department of State’s Bureau of Democracy, Human Rights and Labor.

Tavaana’s mission is a critical one: to build capacity within Iranian society through civic education and public dialogue on topics like women’s rights, Islamic reform and democratic values, issues which remain generally taboo within the Islamic Republic. It does so via virtual classrooms, social networks and a broad range of open access educational resources such as e-books, audio books, reports on civil society development, case studies on nonviolent struggles for democratic transition in other countries, and more. Tavaana’s sister initiative, Tavaana Tech, helps Iranians acquire circumvention technology and technological know-how so they can freely and safely use the Internet to win their freedom. Its Tolerance Project works to promote broader understanding among Iranians (and Arab audiences) of religious freedom and pluralism.

If much of this sounds like the “soft power” efforts marshalled by the United States and its allies against the Soviets at the height of the Cold War, then it should. According to Memarsadeghi, Iran’s population today is very similar to the captive audience that languished behind the Iron Curtain. It is a population that understands full well the deformities of the current regime, chafes under its increasingly blatant excesses, and has given up hope that any sort of meaningful reform of the existing system is possible. But it is also one that is demoralized by a lack of attention from the outside world and outgunned by the increasingly repressive practices of the ruling regime.

Here, Memarsadeghi and her colleagues believe, history can help to both inform and empower. Among Tavaana’s most successful—and important—initiatives has been the dissemination of the translated works of liberal thinkers ranging from Abigail Adams and Montesquieu to dissidents like Vaclav Havel and Andrei Sakharov. By sharing the “lessons learned” from their respective struggles, Tavaana is trying to demonstrate that the Iranian experience is not unique, that other dissidents have succeeded against seemingly impossible odds, and that Iran’s political activists might be able to do the same.

Revolutionary fervor alone is not enough, however. For Memarsadeghi, a long-time democracy and human-rights professional, the critical component of any prospective regime change in Iran will be the complexion of the society that emerges after. Democracy, she observes, isn’t inevitable. Advance work needs to be done to ensure that Iranian society is tolerant, open and pluralistic. Thus, Memarsadeghi and Tavaana aren’t planning for the “day of” the revolution, the way so many other opponents of the Iranian regime seem to be. Instead, their work focuses on the “long game” of creating the necessary conditions for an eventual democratic transition in Iran.

Today, doing so is a decidedly challenging task. President Barack Obama, eager for some sort of accommodation with the Islamic Republic, opted to snub the “Green Movement” when it emerged in Iran in the summer of 2009. That state of affairs left Iranians fearful of throwing their full weight behind internal protest, and cynical about whether they could truly expect to receive U.S. support if they did.

Those doubts have lingered into the Trump era. President Donald Trump’s Iran policy, Memarsadeghi says, is “only halfway pro-freedom.” Indeed, as many have by now noted, issues of human rights, democracy and freedom were conspicuously absent from the twelve points enumerated by Secretary of State Mike Pompeo in May of 2018 as prerequisites for a normalization of relations between Washington and Tehran.

That absence reflects the fact that the present administration—in contrast to that of the last Republican president, George W. Bush—appears deeply ambivalent about anything resembling a “freedom agenda.” The Trump White House has so far been hesitant to unequivocally assist democratic forces abroad, or to truly emphasize the plight of captive populations in places like Venezuela, Cuba and Russia.

Iran is no exception. While the Trump administration has publicly expressed its support for the current protests taking place within Iran, it has not done much to concretely help their cause—at least not yet. This, Memarsadeghi is convinced, is a critical error. As she puts it, “not interfering is interfering.” In other words, the appearance of American ambivalence toward the plight of the Iranian people gives succor to forces, both within the Islamic Republic and abroad, that prefer the current status quo to continue to prevail.

Nevertheless, Memarsadeghi remains hopeful that “maximum pressure” will eventually evolve to include a real campaign to promote democracy within Iran. When it does, she says, Washington will need to place greater emphasis on (and do more reporting about) the endemic corruption of Iran’s clerical elite. It will have to deepen its engagement with the Iranian people via social media, and work with internet providers and social-media firms to make sure those channels of communication remain open despite regime pressure. It will need to creatively counter disinformation from the Iranian regime and its U.S.-based “echo chamber” of journalists, academics and think tank experts—particularly as it relates to the by now long-debunked myth of “reform” and “moderation” within the Iranian regime. It will need to elevate the status of Iranian opposition leaders and activists in American diplomacy and public discourse. And it will be obliged to supply critical financial resources—like America once did for Poland’s Solidarity movement—to enable protestors and labor organizers in particular to continue their activism and still feed their families.

Such actions, Memarsadeghi believes, would in turn stimulate American civic organizations, such as teachers’ unions, to recognize the imperative of solidarity with their counterparts in Iran. As she sees it, they could also decisively tip the balance of power on the Iranian “street” away from Iran’s ayatollahs and toward the Iranian people, with potentially momentous consequences. Washington simply needs to decide who it supports in the struggle for the soul of Iran.

Ilan Berman is senior vice president of the American Foreign Policy Council in Washington, DC. This piece is the fourth in a series of articles exploring the beliefs, ideas and values of different factions within the Iranian opposition. The first installment, covering the agenda of former Crown Prince Reza Pahlavi and his supporters, can be found here. The second, outlining the worldview of the Mujahideen e-Khalq, appears here. The third, examining the activism of Masih Alinejad and the broader Iranian anti-hijab movement, is located here.