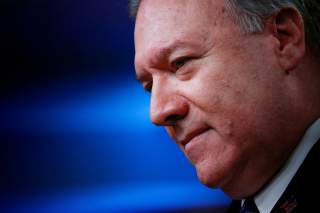 Secretary of State Mike Pompeo resurrected a Bush-era talking point in the wake of the assassination of Iranian Gen. Qassem Suleimani. He accused Suleimani of fostering a "relationship with the Taliban and related groups” during a Tuesday press conference at the State Department.

A U.S. drone tracked and killed Suleimani in the early hours of January 3, which brought the United States and Iran to a new level of conflict and prompted Iranian leadership to promise “hard revenge.” In the wake of the assassination, the Trump administration is facing scrutiny for committing an act of war without consulting Congress, as leaks have undermined the administration’s claims that Suleimani was an imminent threat to American lives.

Now, both Democrat and Republican lawmakers are questioning the administration’s case for killing Suleimani, and the administration appears to be defending itself by reverting to an eighteen-year-old argument for waging war in the Middle East.

Vice President Mike Pence wrote in a social media post published on January 3 that Suleimani took part in “the clandestine travel to Afghanistan of 10 of the 12 terrorists who carried out the September 11 terrorist attacks in the United States.”

But the evidence that White House officials presented did not support Pence’s claim and the number of attackers on September 11, 2001, was not twelve, but nineteen.

Pompeo then accused Iran of backing the Taliban, an Islamist political movement in Afghanistan with ties to Al Qaeda, the organization that planned the September 11 attacks.

“In Afghanistan, there’s an aspect of that conflict that deserves more attention, and that is the Islamic Republic of Iran’s involvement,” Pompeo said. “Most people know about Iran’s proxy networks in the Arab world, but it also has a relationship with the Taliban and related groups.”

The Secretary of State also claimed Iran had a relationship with the Haqqani Network, a Pakistan-based guerilla group that was designated a terrorist organization by the Obama administration, and former Taliban commander Mullah Dadullah. After his arrest in 2011, Dadullah told journalists he had been paid by Iranian officials to destroy a dam that would reduce water flow to Iran.

Congress authorized the President in September 2001 to use “necessary and appropriate force” against anyone who “planned, authorized, committed, or aided the terrorist attacks that occurred on September 11, 2001, or harbored such organizations or persons.” U.S. forces invaded Afghanistan the next month.

The Bush administration bolstered its case for invading Iraq in 2003 by pointing to alleged contacts between Iraqi intelligence officers and members of Al Qaeda, but the official 9/11 Commission found no “evidence indicating that Iraq cooperated with al Qaeda in developing or carrying out any attacks against the United States.”

Suleimani, ironically, has a long history of enmity with the Taliban, according to a white paper by the Combating Terrorism Center at West Point. The Iranian special forces commander led an effort to back anti-Taliban fighters after the Taliban murdered eight Iranian diplomats in 1998, and coordinated intelligence sharing with U.S. forces in Afghanistan after September 11.

But the Iranian government has also backed the Taliban as part of a wider political strategy. U.S. military intelligence wrote in an unclassified November 2019 report that “Iran has provided calibrated support—including weapons, training, and funding—to the Taliban” since 2007.

“Tehran does not seek to return the Taliban to power,” the Defense Intelligence Agency report said, but aims “to counter U.S. and Western influence in Afghanistan, combat ISIS-Khorasan [Central Asia], and increase Tehran’s influence in any post-reconciliation government.”

Pompeo had attempted to link Iran to the September 11 attacks once before. He gave Congress classified intelligence about a supposed Iranian relationship with Al Qaeda in June 2019. War-weary members of Congress pressed State Department officials, who admitted in a public hearing that the 2001 authorization for the use of military force against Al Qaeda does not cover Iran.

Leaks from inside the Trump administration suggest that Pompeo had lobbied Trump since that summer to assassinate Suleimani.

Speaker of the House Nancy Pelosi (D–Cal.) proposed a bill “to limit the President’s military actions regarding Iran” under the War Powers Act after Suleimani was killed.

The Trump administration’s immediate case for killing Suleimani was based on the argument that Suleimani was “actively developing plans to attack American diplomats and service members in Iraq,” following clashes between U.S. forces and an Iranian-backed militia in that country.

“This wasn’t a revenge attack. This wasn’t killing him because what he’d done in the past,” Sen. Lindsey Graham (R–S.C.) said on Fox News the next day. “This was stopping him from planning another attack that was going to be widespread that could cost hundreds of Americans their lives. He acted in a defensive way and a preemptive way.”

But other members of the president’s party questioned the case for assassinating the Iranian commander. “A war without a Congressional declaration is a recipe for feckless intermittent eruptions of violence,” Sen. Rand Paul (R–Ky.) argued on Twitter.

Pompeo similarly could not point to a specific threat from Suleimani and instead pointed to the Iranian general’s past support for violence by the Syrian government and Iraqi militias.

“If you’re looking for imminence, you need look no further than the days that led up to the strike that was taken against Suleimani,” he said. “Then, you, in addition to that, have what we could clearly see were continuing efforts on behalf of this terrorist to build out a network of campaign activities that were potentially going to lead to the death of many more Americans.”

Some members of Congress still did not buy the case.

“Frankly, if the president came to Congress and said ‘look, Suleimani is responsible for American deaths, I want to authorize that we can go after any Iranian officials that are responsible for American deaths,’ and if he got that authorization, that would be one thing,” said Rep. Ro Khanna (D–Calif.) in a Fox News interview immediately after Pompeo’s press conference. “But he has not done that. And those of us who believe in Article I of the Constitution believe it’s Congress’s decision on whether to declare war or not.”