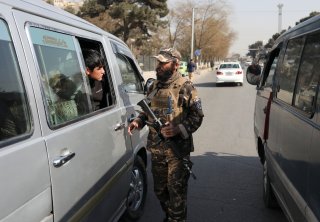 Omar Khalid Khorasani, a high-ranking member of the Tehreek-i-Taliban Pakistan (TTP) terrorist group, was reportedly killed on Sunday night by a roadside bomb in Afghanistan’s southeastern Patika province, according to the group.

Khorasani, also known as Abdul Wali Mohmand, was one of the co-founders of the TTP in the early 2000s and maintained an active leadership role in the organization. Prior to his death, Pakistani officials had accused him of directing several high-casualty terrorist attacks within the country, and the U.S. government had placed a $3 million bounty on his head as part of the Rewards for Justice Program.

TTP officials quickly confirmed that the killing had taken place and alleged that Pakistani intelligence agents had planted the bomb, although they did not elaborate. Khorasani’s driver and two of his aides also reportedly perished in the blast, according to the Associated Press.

Although Wali helped to found the TTP, he broke away from the organization in 2014 and started his own terror group, the Jamaat-ul-Ahrar (JuA). In the years that followed, the JuA carried out several of Pakistan’s deadliest terror attacks, including a bombing of a park in the Pakistani city of Lahore on Easter Sunday in 2016, killing more than seventy people. The group is also thought to have carried out the 2015 assassination of the home minister of Punjab, Shuja Khanzada, and it claimed responsibility for a March 2016 roadside bombing in the northwestern city of Peshawar that killed two Pakistani employees of the city’s U.S. consulate. Several years later, Khorasani dissolved the JuA and reintegrated its forces into the TTP as part of a push to restore cohesion among Islamist militant groups in Pakistan.

Initially formed by many Taliban veterans from neighboring Afghanistan but not formally affiliated with the Afghan Taliban, the TTP has sought the overthrow of the Pakistani government through a series of violent terror attacks. The group has also maintained an ongoing insurgency against the Pakistani military in the country’s northwestern Khyber Pakhtunkhwa region. An estimated 80,000 Pakistanis have been killed in TTP-related incidents over the past two decades.