Is the OPEC+ Oil Cut a Turning Point in U.S.-Saudi Ties? 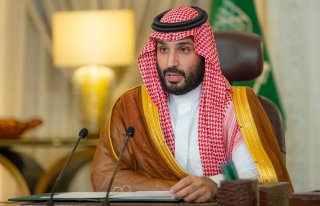 In the aftermath of the OPEC+ oil cartel’s decision to cut production last week, Democratic leadership in Washington finally appears determined to rethink America’s relationship with Saudi Arabia, at least for the time being.

On Monday, Sen. Bob Menendez (D-NJ), the chairman of the Senate Committee on Foreign Relations, released a blistering statement that denounced “Saudi Arabia’s recent decision to help underwrite Putin’s war through the OPEC+ cartel,” and called for a freezing of all security cooperation with Saudi Arabia. Through his position atop the Foreign Relations Committee, Menendez vowed not to allow any arms sales to Saudi Arabia until it changes its stance on oil production and the Russo-Ukrainian War more broadly.

One day later, the White House signaled that it would be open to supporting such a plan from Congressional Democrats. “I think the president’s been very clear that this is a relationship that we need to continue to re-evaluate, that we need to be willing to revisit,” John Kirby, the strategic communications coordinator for the National Security Council, said on CNN. “And certainly in light of the OPEC decision, I think that’s where he is.”

These statements follow a bill introduced last week by three House Democrats, including Rep. Tom Malinowski (D-NJ), a longtime critic of Saudi Arabia and the former Washington director for Human Rights Watch, that called for the removal of U.S. troops and missile defense systems from Saudi Arabia and the United Arab Emirates. “It is time for the United States to resume acting like the superpower in our relationship with our client states in the Gulf,” read a statement released by Malinowski and Reps. Sean Casten (D-IL) and Susan Wild (D-PA). “They have made a choice and should live with the consequences.”

Certain Democrats in Washington have been calling for such a re-evaluation for years. In 2016, Sen. Chris Murphy (D-CT) gave a talk at the Council on Foreign Relations in which he made the case for recalibrating relations with Riyadh. And many progressive activists and advocates criticized President Joe Biden’s July trip to Riyadh, arguing that he was giving legitimacy to Crown Prince Mohammed bin Salman, and predicting that he would have very little to show for his overtures—a prediction that appears to have come true. But this rhetoric from Menendez and Biden, both establishment Democrats who have typically adopted more status quo positions on foreign policy, means that perhaps some level of changes in the U.S.-Saudi relationship may be on the horizon.

Of course, this potential pivot does carry some caveats. First, this is not the first time that Biden has indicated that under his leadership, the relationship between Washington and Riyadh would not be business as usual. During his presidential campaign, Biden pledged to turn Saudi Arabia into “the pariah that they are,” largely as a response to the murder of journalist of Jamal Khashoggi and the Saudis’ brutal war on Yemen. And in early 2021, then-press secretary Jen Psaki told reporters that “the president’s intention, as is the intention of this government, is to recalibrate our engagement with Saudi Arabia.” But with few exceptions, there were no policy changes that reflected these stated desires. At one point, there was a sense that following Khashoggi’s assassination, Saudi Arabia was becoming persona non grata in Washington. But with a combination of time, an intense lobbying blitz, and eventually, a looming oil crisis, a number of Western governments resumed normal relations with the Saudi regime.

Second, the way in which these statements were phrased suggests that there is a fairly simple way for Saudi Arabia to return to the United States’ good graces. If OPEC+ reverses course on its decision to cut oil production, then the exchange of oil for security could resume. It is possible that after years of foreign and domestic policy missteps and pressure from activists, the U.S. government is prepared to truly reset relations with Riyadh. Even though the response from official Washington to production cuts has so far been harsher than it was when Saudi Arabia killed an American citizen and thousands of Yemenis, given the evidence that preceded this week, it may be more likely that the Biden administration is willing to give Saudi Arabia a chance restore the status quo ante rather than cutting ties.

The events of the last week should at least serve as a reminder to the Biden administration that Saudi Arabia’s interests will not always align with those of the United States. Though the OPEC+ decision will ultimately help Russia and its president, Vladimir Putin, in the ongoing battle over oil, it is not evidence that the war now pits “Putin and Saudi Arabia against the United States,” as Sen. Dick Durbin (D-IL) said on CNN. Rather, as Menendez said in his statement, it was a “decision driven by economic self-interest.” Riyadh always has and will continue to make decisions motivated by its economic self-interest, and that much should now be clear to policymakers. In the future, just as with any other country, it is important that the United States be willing to cooperate with Saudi Arabia when the two countries’ economic or security interests align. Washington, though, must also be unafraid to stand up for its interests when they diverge from Riyadh’s.

Blaise Malley is an Associate Editor and writer at The National Interest. His work has appeared in The American Prospect, The American Conservative, Responsible Statecraft, and elsewhere. Follow him on Twitter @blaise_malley.