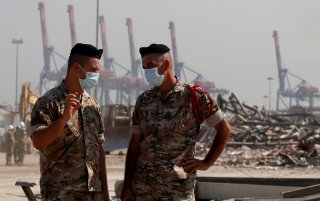 Nearly a year after the enormous explosion that destroyed downtown Beirut, the country remains in a protracted crisis. Following a fifteen-year civil war in the 1970s and 1980s, Lebanon’s government has remained deeply divided along sectarian lines, with periodic clashes between groups. Corruption remains endemic at all levels of the government, and the economy has collapsed, with the Lebanese pound losing 90 percent of its value relative to 2019. Following the August 2020 explosion, the Lebanese government resigned en masse, but has remained in office in a caretaker capacity due to a failure to hold new elections.

One of the organizations that have been hit hardest by the funding shortage has been the Lebanese Armed Forces. Its budget and the wages of its soldiers have remained more or less constant as the value of the currency spiraled downward. Consequently, the average Lebanese soldier now earns less than $100 per month, and the nation’s air force has resorted to selling helicopter rides to tourists to gather funds for their maintenance.

In June, Joseph Aoun, leader of the Lebanese Army, held a meeting in Paris where he pleaded with international leaders for relief funding. Aoun warned that the army, which remains one of Lebanon’s most trusted institutions, could collapse, with dire consequences to the rest of the country.

Weeks after this meeting, Qatar offered to provide seventy tons of food per month to the Lebanese Army. The donation was announced by Qatari foreign minister Mohammad Al Thani during a state visit to Beirut and was heralded by Qatar’s state news agency as a commitment to Lebanon’s stability and a gesture of friendship between the two nations.

The oil-rich states of the Persian Gulf have previously stepped in to help Lebanon during past financial crises. However, the Gulf’s largest donors, Saudi Arabia and the United Arab Emirates have grown increasingly wary of helping Lebanon, given the tremendous influence exercised by the Iran-allied Hezbollah militia-turned-political party. In a bizarre incident in 2017, Saudi Arabia was accused of detaining then-Lebanese Prime Minister Saad Hariri during a visit to Saudi Arabia and forcing him to resign; after Hariri returned to Lebanon, he rescinded his resignation.

Qatar, which does not share the other Gulf states’ animosity towards Iran, has proven more willing to help. Lebanese president Michel Aoun welcomed its support in an official statement on Friday afternoon.

Lebanon has also solicited funds from Western organizations, including the International Monetary Fund and the World Bank, although Western donors have asked for a series of reforms that the Lebanese government has so far not provided.