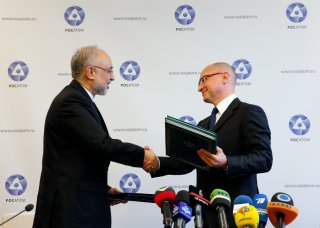 Three months after launching the full-scale invasion of Ukraine, Russian president Vladimir Putin met with Alexei Likhachev, the director general of Rosatom, the Russian state-owned nuclear corporation. In that meeting, Putin, who was interested in the corporation’s foreign revenues, asked Likhachev: “Has the number of foreign orders grown?” Likhachev responded,

Yes, they continue to grow every year, and every six months ... Mr. President … 1.5 trillion rubles is the income we will try to achieve this year. Let me stress that this is the open part of the income (regarding open products and open programmes), so in total it will be higher. ... At the same time, our own investment is growing at a greater rate. I hope that at the end of the year we will exceed 400 billion rubles in corporate investment.

Rosatom corporation is an important source of revenue for Moscow. It is one of the world’s leading suppliers of nuclear reactors. In addition, it is responsible for the Russian nuclear power industry, nuclear weapons division, nuclear-powered icebreaker fleet, and nuclear research institutions. More importantly, it represents Putin’s ability to establish and maintain the nuclear capabilities of multiple countries worldwide. It manages more than 300 companies and organizations involved in all stages of the nuclear weapon and power production chain. According to its annual report for 2020, the corporation’s ten-year portfolio of overseas orders reached $138.3 billion. Atomic power plant constructions abroad constituted $89.1 billion.

The corporation is entirely under the control of the Russian president, who sets its strategic objectives and appoints its director and the members of its supervisory board. In addition to conventional arms supplies, mercenaries, and a military base in the region, Putin actively uses Rosatom to expand Russian influence in the Middle East. Rosatom plays a key role in approaching and establishing closer ties with regional powers. Today, the corporation has a regional headquarters in Dubai in the United Arab Emirates (UAE) and plans to open a branch in Saudi Arabia. Despite Western sanctions on Russian exports, Rosatom still seeks to increase the number of its regional clients. When President Joe Biden announced a U.S. ban on Russian oil, gas, and coal imports in March, there was no mention of Rosatom. That exemption could be attributed to the dependency of the United States and its Western allies on Russian uranium, which made up 14 percent of U.S. uranium purchases in 2021 and 20 percent of EU imports of uranium in 2020. Sanctioning Rosatom after cutting Russian gas exports to Europe could aggravate the global energy crisis. That fact may give Rosatom the privilege and the freedom to act in the Middle East.

After Iran, plans to go nuclear in Egypt, Jordan, Saudi Arabia, Turkey, and the UAE reveal ambitions for economic growth to address the increasing demand for electricity and desalinated water. These plans also match these countries’ desire for energy self-sufficiency, to reduce imports, to diversify their energy sources, and to increase their exports. Furthermore, in the Muslim world, there is a belief that possessing nuclear technology could add to the state’s prestige and power on the global stage. For decades, the unfulfilled dream of possessing nuclear technology was mired by narratives of Western and Israeli conspiracies to deprive the Arabs and Muslims of nuclear technologies. Today, going nuclear in the Middle East not only responds to the population’s needs but also serves the Arab autocracies’ interest in asserting their legitimacy. In non-democratic contexts, a lack of electoral legitimacy could be compensated by distributing rents, establishing national megaprojects, and using propaganda machines to domestically market the regimes’ achievements. Rosatom is well positioned to help satisfy those needs and interests.

Since the Arab uprising in 2011, Russia has sought to establish footholds in the region. It benefited from the regional conflicts, the political vacuum resulting from the U.S. withdrawal (pivoting to Asia), and the tension between some Arab regimes and various U.S. administrations over the Iran nuclear deal and human rights violations. Reapproaching Russia, which counterbalanced the Western powers during the Cold War, loomed again as an opportunity for the Arab regimes to recalibrate their relationships with the United States. Strengthening ties with Putin could allow the Arab governments to pressure the United States as needed. Moreover, Putin has asserted himself as a credible ally by stabilizing Syrian president Bashar al-Assad and offering him impunity despite international pressure. But even before the Arab uprisings, Russia successfully challenged the West and proved its potential to satisfy the need of revolutionary Iran for nuclearization.

In 2005, Iran and Rosatom signed a cooperation agreement according to which Russia contributed to the development of the Bushehr Reactor. Though the United States had urged Moscow to end the project, which could aid an Iranian nuclear weapons program, U.S. officials said in 2002 that Washington would drop its objection if Russia took steps to mitigate the project’s proliferation risks. And again, despite Western pressure, Rosatom signed a contract with Iran in November 2014 to construct two additional nuclear power reactors in Bushehr. The project’s construction began in September 2016 and is expected to take ten years to complete. However, Putin’s ambition goes beyond Iran’s radical regime to include moderate regional players. That entailed approaching Egypt, Turkey, Saudi Arabia, the UAE, Morocco, and Jordan.

In 2015, Rosatom signed agreements with multiple Arab countries, including an agreement with the Saudi kingdom related to small and medium reactors and another pre-investment agreement with Jordan which was then scrapped three years later. But Rosatom has not given up, and hopes that a future proposal for Jordan to use small modular reactors “would be revived at some point in the future.” Ultimately, Rosatom’s focus on countries that used to be part of the U.S. orbit has yielded big catches in Egypt and Turkey. Both countries play influential roles in regional politics based on their strategic locations, demography, and cultural influence. In 2015, Rosatom signed an agreement with Egypt to build a nuclear power plant in Egypt near Dabaa on the Mediterranean coast by extending a $25 billion loan from Russia. The high cost for Egypt, which already struggles with its foreign debts, highlights the Egyptian government’s need to enhance its domestic political standing and go beyond Washington, who has criticized Egypt since 2013 over its human rights record. Following Biden’s visit to Saudi Arabia in July, Russian foreign minister Sergey Lavrov traveled to Cairo to rally nations on his country’s side. A few days later, Egypt announced that Rosatom began constructing Egypt’s first nuclear reactor for peaceful use, calling it “the largest project of Russian-Egyptian cooperation” since the 1950s.

In Turkey, construction is also ongoing for what Rosatom called “the biggest project in the history of the Russian Turkish relations.” The project went back to 2010 when Turkey concluded a $20 billion contract with Rosatom to build a nuclear power plant including four power units. In December 2010, the Akkuyu Nuclear Joint-Stock Company was set up in Ankara to implement the project. Rosatom’s share ratio in Akkuyu Nuclear is approximately 75 percent. Four years later, analysts in Washington debated whether Turkey sought to possess nuclear weapons. That question came amid a series of Turkish interventions outside of its borders (in Syria, Iraq, and Libya) as well as a contestation with other regional powers and disagreement with the United States over multiple issues, including Syria’s Kurds and Turkey’s 2019 procurement of a Russian S-400 defense system. Like Egypt, Turkey is now facing an economic crisis. Thus, progress in its nuclear program may help Turkish president Recep Tayyip Erdogan enhance his domestic political standing and diversify his country’s relationships beyond Washington to other global players such as Russia. This month, Rosatom awarded TSM Enerji the contract to undertake the remaining construction work at the $20 billion nuclear power plant it is building in Akkuyu in southern Turkey.

In 2017, Morocco, too, signed a memorandum of understanding with Rosatom that opened the door for multiple areas of bilateral cooperation, including but not limited to Rosatom’s assistance in developing the nuclear infrastructure, maintenance, and equipment supply for the needs of the kingdom’s national atomic program. However, as in the Jordanian case, Morocco-Rosatom cooperation has not yet materialized. Progress has also been slow in the UAE, which despite embracing Rosatom’s regional headquarter in Dubai and signing a memorandum of understanding in 2019, has relied on a group led by Korea Electric to build its nuclear plants (of which two of four have been built).

Nonetheless, Russia is committed to further cooperation with the Arab states. Development needs, entangled with political dynamics in a volatile region, do not exclude an additional role for Rosatom in future nuclear projects in the Middle East. For those who seek to recalibrate their relationships with the United States, Putin’s nuclear arm remains an attractive option.

Amr Salah is an Egyptian Analyst, Ph.D. Candidate and Instructor at Carter School for Peace and Conflict Resolution at George Mason University. He has made numerous contributions to Arab journals and newspapers as well as the Washington Institute for Near East Policy, Carnegie Endowment for International Peace, and Freedom House.