Russia Is Not Abandoning Syria or Assad 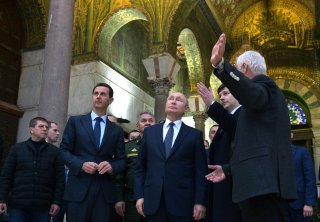 The doom merchants have been predicting the demise of Assad since he lost his four most senior security officials to a bombing in 2012. Then there was the supposed “game-changing” moment that former Republican Guard officer and insider Manaf Tlass defected during the same year. Similarly, early assessments that Assad shall fall in a few weeks turned out to be baseless devoid of any reality of understanding the ground realities. Now the same analysts and media outlets are going on hyperbole as to how Russia is “tired” of Assad and the rift with the richest man in Syria, Rami Makhlouf is a sign of the end. As a matter of fact, Russia has at each time in Syria’s history even predating the Assad family backed the military to dominate affairs. As Assad focuses on economic stability for a cash-strapped Syria, the Russians are just recalibrating ways to consolidate their military gains into the political and economic domain.

Russia’s Pivot in the Region

The talk of a Russian rift or frustration with Damascus fundamentally overlooks Russia’s historic role in Syria. It far predates President Vladimir Putin and is a continuation of over sixty years of unbroken participation in Syrian defense affairs. This relationship formed a key part of Soviet policy in the Arab world. Fred Lawson, in his seminal book, Why Syria Goes to War, goes into some length explaining how throughout the 1960s the Soviet Union fully backed the Syrian defense establishment against American and Israeli threats and even vetoing several “complex security council resolutions” which entailed the Syrians giving up support for Palestinian camps and fighters attacking Israel between 1963–1966. This was before Hafez al Assad came to power, however as Lawson points out that as Assad cemented his rule and the Russians focused supporting the military through him. This policy has not changed. In an investigative report for the Royal United Services Institute in 2016, I authored a chapter, The View from Damascus, on why the Syrian military and intelligence preferred working with the Russians, the Russians were widely seen as backing state institutions and also had a history of supporting Syria in regional wars. Whilst Iran was just seen as assisting their own proxies rather than the Syrian military. In fact, Russia helped Assad and the Syrian military win back the state and challenge any idea of having a parallel security apparatus.

At the Center for National Interest event five years ago in 2015, I had predicted why Russian intervention would be successful at a time when many were questioning the motives or whether this would be a new Afghanistan for Russia. If anything, Syria was the new Chechnya, not the new Afghanistan. Once Putin had scored a destructive victory in Grozny, he rebuilt and modeled a whole new face for the semi-autonomous region. The Russians are rebuilding the Syrian military and incorporating or simply getting rid of militias that threaten Damascus sovereignty. Going after economic corruption has been on Assad’s agenda since 2018, and only now has he had some respite on the military front he is going after everyone including his cousin. The Russians keep a close eye on Damascus and have seen how the public mood turned against corruption and the big names like Makhlouf. In 2018, at a conference at Damascus University organized by the British Syrian Society, Syria’s prime minister and finance minister were grilled over state corruption and how it posed the biggest danger to stability going forward. No names were spared. The Russians were simply advising Assad to act on what was being articulated by civil society and business elites, stamp out the war economy. Similarly, after a military victory, and the wide-scale destruction the economic war is just beginning, and the Russians are already lining up new allies to work with in Syria.

Moshe Mao’z book, The Sphinx of Damascus along with Jubin Goodarzi’s Iran and Syria, talk about how Syria always managed to somehow balance their strong relationship with Iran yet keep forging strong strategic interests with Gulf countries. Every time it seemed the Syrians had fallen out with the Saudis or Kuwait and UAE, Assad would make up and make himself indispensable to the Gulf monarchies. Bashar al Assad had learned from his father on when and how to use the Gulf card and after the falling out of the Hariri assassination he successfully made up with the Saudis and brought the whole GCC back as investors in Damascus as Syria overcame sanctions in the post-Hariri period.

Now Assad is doing the same and at the opportune time, Moscow’s interests are also lining up with several Gulf states, most notably the UAE and Bahrain with the tacit support of the Saudis. Russia and the UAE are now on opposite sides to Turkey both in Libya and Syria. This has meant that Turkey will have to perform a careful balancing act with Russia given that it seems to be further isolated in the Mediterranean. And, with both Greece and Cyprus reaching out to Damascus, this further increases the pressure on Ankara. The Russians will look to capitalize on the UAE’s fresh engagement in Syria, as UAE Crown Prince Mohammed bin Zayed looks to support Assad as a counterbalance against Turkish influence in Northern Syria.

The UAE has openly praised the “wise leadership” of Assad, and as the coronavirus pandemic spread, Crown Prince Mohammed bin Zayed made a very public phone call and show of support to Assad, promising to help during the pandemic and with the reconstruction of Syria. The UAE has also sent high-profile trade delegations, defying US displeasure. Equally important is that the Saudi Crown Prince has made overtures to Assad in a number of interviews, publicly calling for an acknowledgment of Assad’s victory and Saudi acceptance of Assad's rule in return for pushing Iran out.

Putin is looking to work with the UAE and Saudi Arabia in Syria by leveraging their animosity against Turkey and the desire to balance Iranian influence. It is an open secret that the Russians want a reduced Iranian role, something the whole region would welcome. Russia is also welcoming an increasingly visible Chinese presence in Syria. There have been regular senior Chinese officials visiting Damascus and the Chinese see Syria as a long-term investment rather than a quick reward. In addition, Greece has appointed its first official envoy to Syria since the war began, which is further evidence of new alliances to counter Turkey in Syria.

Putin once he had consolidated Russia after the Chechnya war went after the same oligarchs who supported him earlier but were a hindrance to progress Moscow further beyond military consolidation. Similarly, Assad knows for him to win the economic battle he must get rid of corrupt names even if they are family members. In this, he has Russia’s support and his own military. Russia is not abandoning Syria or Assad, it is an almost sixty-year relationship and here to stay permanently.