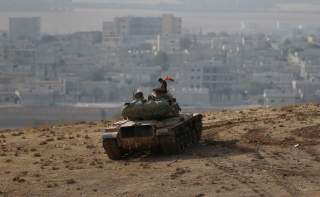 In early February, for the first time in the rebel-held stronghold of the Idlib province, the Syrian government directly hit Turkish targets, killing eight Turkish soldiers and civilian contractors in one of the observation posts that Turkey built to monitor the de-escalation zone. It was a shock for the Turks; the blame immediately was placed on Russia; without whose permission the Syrian Armed Forces is not able to “move a muscle.” Turkish president Recep Erdogan then issued an ultimatum to Damascus to pull back from the observation posts south of the Idlib city that the Syrian forces had surrounded. So, what went wrong in a seemingly blooming strategic partnership? We need to first understand what Syria’s Idlib province means for Russia and Turkey.

Despite the growing partnership, Idlib has always remained a sore spot between Ankara and Moscow. An estimated four million civilians are trapped in the rebel exclave surrounded by Turkey’s sealed border on the west and the Syrian regime, which is encroaching on it from the south and east. Thirty thousand are believed to be members of the Salafi Hay’at Tahrir al-Sham (HTS). HTS has fighters from groups such as the Caucasus Emirate, Soldiers of the Caucasus and the Turkistan Islamic Party, who came from Russia’s Caucasus region and Central Asia. Being casualty-averse due to the bitter experience in the 1990s where Chechen fighters killed some ten thousand Russian soldiers,  Moscow wants to do everything to prevent those fighters from reaching the Russian homeland. In 2015, Putin said, “More than 2,000 fighters (some estimate four-thousand) from Russia and the ex-Soviet republics are in the territory of Syria. There is a threat of their return to us. So, instead of waiting for their return, we are better off fighting them on Syrian territory.” So, in Idlib, Russia has employed “the Grozny Model” whereby urban warfare is avoided in favor of intense and indiscriminate bombings, which sometimes damage mosques and hospitals and claim a high-civilian-death toll. These bombings have created a constant refugee inflow towards Turkey, which is already inundated with more than four million Syrian refugees. Simply put, Russia wants to eliminate those fighters by any means necessary and Turkey doesn’t want any more refugees. Additionally, there is no clear solution to the Idlib problem.

The strategic M4 and the M5 highways, which go through Idlib, and vital for the Damascus Regime and Russia. The full control of those highways will give Russia a logistic benefit because they connect Russia’s Khmeimim Base in Latakia on the Mediterranean coast with the Russian troops in northern Syria. Furthermore, considering the acute food crisis in Syria, the regime deems access to fertile Aleppo via those highways essential for survival. These points have prompted the Syrian regime, with Moscow’s backing, to push towards the M4-M5 line, encircling three Turkish observation posts along the way.

But, the pressing question for the Syrian attack on the Turkish personnel persists is: Why now?

What may be considered as the immediate cause of the attack was the alleged killing of four Federal Security Service (FSB) members, a lieutenant, a major and two captains, on by the pro-Turkish proxies in north-west Aleppo on February 1. However, Idlib had already turned into a pressure cooker which just exploded, threatening the Turkish-Russian relations.

In 2015, Russia and Turkey’s strategic needs dictated their cooperation. Having felt threatened by the unwavering U.S. support for the Peoples’ Protection Units (YPG), Ankara turned to Moscow for help. Putin gladly exploited Turkey’s security needs in the hope of undermining the U.S. presence in Syria. The Turkish-Russian relations grew so intimate that many in the West began to question Turkey’s NATO membership. Putin’s investment paid off as Turkey conducted three incursions, the last of which, Operation Peace Spring, which was launched in October 2019, dislodged the United States and its proxies from northern Syria. Ironically, it is as if Turkey’s successful spoiling of Washington’s plans in Syria allowed Russia to gradually distance itself from Ankara as Moscow had (partially) achieved its goals.

Russian efforts to curb the Turkish presence in Syria came during Operation Peace Spring (OPS). After talks in Sochi, Erdogan had to accept Putin’s condition that the Russian and Syrian forces were to take control of a large swathe of north Syria, except a 20 x 100-mile pocket, which the Turkish military took control of during Operation Peace Spring. This was a serious blow to Turkey’s initial plan to establish a twenty-mile-deep safe zone along the Turkey-Syria border to relocate its four million refugees.

After this deep disappointment, Ankara began to take steps Moscow perceived as “irritating.” Erdogan raised the idea of building an artificial canal (Kanal Istanbul) between the Black Sea and the Marmara Sea, bypassing the Bosporus. This idea disturbs Russians because it would allow large naval vessels, such as an American aircraft carrier, into Moscow’s backyard, the Black Sea. This is prohibited by the Montreux Convention of 1936.

Disappointment with Moscow prompted Ankara to re-emphasize its Transatlantic ties. Despite previous bitter sagas with Washington, in a much-publicized event, Erdogan visited Trump in November 2019, reiterating; “Turkish-American relations should be erected upon a strong and a very healthy foundation.” At the December 2019 London Summit, Erdogan called for NATO’s support in Turkey’s fight against YPG in Syria.

Last week, Erdogan visited his Ukrainian counterpart, President Volodymyr Zelensky, in Kyiv, Ukraine, during which time he renewed Turkey’s support for Ukraine’s territorial integrity—a clear message to Moscow for its annexation of Ukraine’s Crimea. Furthermore, Erdogan pledged $200 million to the Ukrainian Army, fighting a war against the Russian-backed separatists in east Ukraine. Finally, in a rare occurrence, only three days before Damascus’s attack on Turkish personnel, the head of U.S. European Command, Gen. Tod D. Wolters, visited Ankara to discuss cooperation in Syria.

It is now evident that the Turkish-Russian cooperation has reached its limits in Syria. Northern Syria and Idlib have become a source of discontent for both. Furthermore, Moscow is not happy with the Ankara-Washington thaw as it is likely to change the balance of power in Syria against Russia. Russian foreign minister Sergey Lavrov called Pompei’s solidarity message with Turkey after the attack as “hypocrisy,” citing Washington’s attempts to take punitive measures after Turkey’s last Syria incursion. Finally, it is evident Moscow wants to gradually reduce or remove Turkey’s influence in Syria as the civil war is slowly coming to a grinding end. For Moscow, the fewer actors in Syria, the better for its maximum gains.

Ankara has come to realize the dangers of getting too close to the Russian bear in Syria and its pendulum is now swinging towards Washington. What comes next is dependent on whether the United States will utilize this Idlib debacle to attract Turkey or come to a common understanding with Russia in the short run. The second option would mean Ankara’s complete loss of all the gains it has made so far.

On a final note, a complete rupture between Ankara and Moscow shouldn’t be expected as Turkey’s economic dependence (agriculture export/tourism/natural gas) on Russia and Russia’s reliance on Turkey in energy transportation and in the Mediterranean dictate the wider trajectory of bilateral relations.