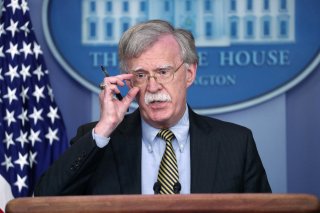 Shahram Poursafi, also known as Mehdi Rezayi, was formally charged with “use of interstate commerce facilities in the commission of murder-for-hire and with providing and attempting to provide material support to a transnational murder plot.”

The plot, the Department of Justice said, was likely in retaliation for the killing of Qassem Soleimani, the commander of the Revolutionary Guard’s Quds Force, in January of 2020.

“The Justice Department has the solemn duty to defend our citizens from hostile governments who seek to hurt or kill them,” said Assistant Attorney General Matthew G. Olsen of the Justice Department’s National Security Division. “This is not the first time we have uncovered Iranian plots to exact revenge against individuals on U.S. soil and we will work tirelessly to expose and disrupt every one of these efforts,” he added.

According to the announcement, Poursafi approached a U.S. individual in October 2021 about taking photographs of Bolton. That individual introduced him to an associate who later became an informant. The informant was offered $250,000 to hire someone else to “eliminate” Bolton, although the fee was later negotiated upward.

“Poursafi told the CHS [confidential human source] that it did not matter how the murder was carried out, but his ‘group’ would require video confirmation of the target’s death,” the Department of Justice’s announcement said. “The CHS asked Poursafi what would happen if the killing was attributed to Iran. Poursafi told the CHS not to worry and that Poursafi’s ‘group’ would take care of it,” it continued. Eventually, Poursafi sent a cryptocurrency payment.

Long known as an Iran hawk, Bolton was former President Donald Trump’s national security advisor between 2018 and 2019. Bolton has said that he pushed for the administration’s abandonment of the Iran nuclear deal, and he has at various times called for strikes on Iran, although he had left the administration prior to the killing of Soleimani.

Bolton later broke with Trump and assailed the former president in his memoir, The Room Where It Happened.

More recently, Bolton made news when he said during a CNN appearance about a January 6 committee hearing that he had participated in coup plots abroad in the past. His point was that coups take work, while the January 6 plot was more amateur.

When pressed on the matter by host Jake Tapper, Bolton said he was talking about the failed regime change effort in Venezuela in 2019. However, Bolton had specifically stated in 2019 that what was happening in Venezuela was “not a coup.”