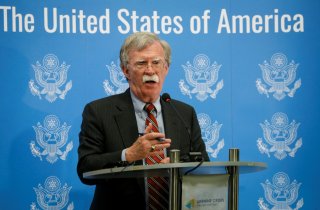 One of the bigger pieces of news from the Tuesday session of the January 6 committee came after the hearing itself, when a former top Trump administration official admitted in a television interview that he had participated in foreign coups.

John Bolton, who served as national security advisor to President Trump before breaking with the former president and authoring a book critical of him, appeared on CNN following the conclusion of the hearing.

After CNN anchor Jake Tapper said, “One doesn’t have to be brilliant to attempt a coup,” Bolton disagreed.

“I disagree with that, as somebody who has helped plan coups d’etat, not here, but you know, other places. It takes a lot of work and that’s not what [Trump] did. It was just stumbling around from one idea to another,” Bolton said.

The statement went instantly viral on Twitter. And while the interview went other directions, Tapper eventually followed up, asking what Bolton meant by having plotted coups.

“I’m not going to get into the specifics,” Bolton said, before referencing Venezuela and the Trump administration’s 2019 attempt to back opposition leader Juan Guaido in overthrowing leader Nicolas Maduro after a disputed election. It was certainly not positioned by the Trump administration at the time as a coup. In fact, Bolton once told reporters: “This is not a coup.”

“I feel like there’s other stuff you’re not telling me,” Tapper said, to which Bolton replied, “I’m sure there is.”

Bolton served in the government at various times prior to the Trump administration, including in the administrations of George H.W. Bush, Ronald Reagan, and George W. Bush. Under the second Bush, Bolton served first as under secretary of state for arms control and international Security, and later ambassador to the United Nations. He has been called an “architect” of the Iraq War.

This was actually not the first time that a cable news guest has decried the incompetence of a particular coup while touting his own experience in executing more professional coups.

Robert Baer, a CIA veteran who was the basis for George Clooney’s character in the movie “Syriana,” went on CNN at the time of the 2016 failed coup attempt in Turkey, arguing that the “Turkish coup was not professionally done” compared to coups that he had a hand in planning.

“I have been involved in coups before,” Baer said at the time. “They should have taken CNN Turk and closed it down the first minutes, the radio station, social media, the internet. Even if they didn’t arrest [Turkish President Recep Tayyip] Erdogan, they should have taken care of all of that right at the beginning,” he said.