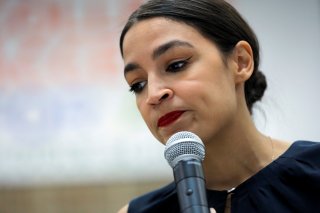 Nine members of Congress, including Senators Bernie Sanders and Elizabeth Warren and progressive standouts such as Alexandria Oscario-Cortez Ilhan Omar, and Ayanna Pressley, signed a letter on Monday calling on the U.S. government to loosen or lift sanctions on the Islamic Republic of Iran. “Sweeping U.S. sanctions have also harmed Iran’s public health sector by limiting their ability to import medical devices and medicine manufactured in the West,” the letter said, adding, “U.S. sanctions make it harder for ordinary Iranians to obtain basic necessities like food and hygienic supplies that they need to survive.” “We urge you to substantially suspend sanctions on Iran in a humanitarian gesture to the Iranian people to better enable them to fight the virus,” they declared.

The progressive lawmakers may be well-meaning, but they are ignorant of recent Iranian history and diplomatic efforts to do just what they propose.

America’s European allies have long been critical of Washington’s confrontational approach toward Tehran. In 1992, then-German Foreign Minister Klaus Kinkel decided to prove Europe could do better. Rather than isolate Iran as President George H.W. Bush and sanction Iran as his successor Bill Clinton tried, Klaus insisted the Europeans try “critical dialogue.” In practice, this meant Europe would correlate trade with Iran based on Iranian respect of human rights and curtailment of its terrorism. In reality, Iranian behavior did not change as it acquired greater access to cash. As soon as Germany launched its diplomatic initiative, Iranian assassins struck.  On September 17, 1992, an Iranian cell murdered four Kurdish dissidents at the Mykonos Restaurant in Berlin.  On April 10, 1997, after hearing from 176 witnesses and reading intelligence files, a German court found Kazem Darrabi, a captured Iranian intelligence agent as well as a Hezbollah accomplice guilty of murder, and two colleagues guilty as accessories. More importantly, the court also concluded that a Special Affairs Committee, headed by Supreme Leader Ali Khamenei and including President Ali Akbar Hashemi Rafsanjani, Intelligence Minister Ali Fallahian, and Foreign Minister Ali Akbar Velayati, had ordered the hit.

Kinkel and his European counterparts did not want to accept defeat, however. Between 1998 and 2005, European Union trade with Iran almost tripled. During the same period, the price of oil quintupled. Much of that hard currency windfall disappeared into Iran’s multibillion dollar nuclear and ballistic missile programs. This period also coincided with constant Iranian regime complaints about the impact of sanctions on the country. Hassan Rouhani, today finishing his second term as president, was at the time the secretary of the Supreme National Security Council, second only to the supreme leader in charting the Islamic Republic’s strategic path.

Then there’s “Khatam al-Anbiya,” the economic wing of the Islamic Revolutionary Guard Corps. At the end of the 1980-88 Iran-Iraq War, the Guards decided they did not want to return to the barracks and forfeit the power they had accumulated in Iranian society during the war. Instead, they decided to invest and become more involved in the domestic economy. Thirty years later they control 40 percent of the economy, including all major industries and they dominate manufacturing. This is one of the reasons it was so easy for the Revolutionary Guards to allegedly divert the diagnostic kits and 7.5 tons of medical equipment that the World Health Organization sent. Khatam al-Anbiya is also one of the major reasons why ordinary Iranian people did not feel any benefits from the unfreezing of assets and an increase in investments in the aftermath of President Barack Obama’s 2015 nuclear deal.

It is all well and good for progressives to want to help the Iranian people amidst this unprecedented health crisis. Frankly, moderates and conservatives want to as well; this is why the State Department offered Iran direct medical assistance, an offer Khamenei refused. Throwing money at Iran can be counterproductive as the system Khamenei and the Revolutionary Guard have put in place do not allow for such aid to benefit ordinary Iranians. At the very least, if the United States is going to aid and assist Iran in its response to coronavirus, it is important to have a mechanism in place to bypass Khamenei, his regime, the Islamic Revolutionary Guard Corp, and Khatam al-Anbiya.

The devil is in the details, but the details matter. Otherwise, not only will Iranians continue to die because of their government’s negligence, but the regime could also divert aid and assistance to further raise its capability to wage war and undermine regional regimes at this time of crisis.