Syria Is a Lost Cause and America Must Move On 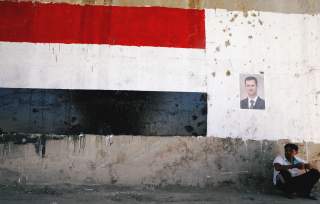 Candidate Donald Trump sounded different from his predecessors. He criticized endless war-making in the Middle East and wanted U.S. forces out of Syria. But U.S. administration officials recently said they are in no hurry to exit the Syrian civil war and threatened military strikes if the Assad government again used chemical weapons.

The seven-year conflict is in its endgame. Backed by Russian airpower and Iranian ground forces, the Assad government has steadily defeated various rebel groups across the country. Damascus is now secure, with rebels finally driven from nearby suburbs. Some neighborhoods in Homs and Aleppo lie in ruins, but fighting has ceased. The regime is in firm control over most of the country.

Only Idlib province remains under insurgent control, and President Bashar al-Assad’s forces are preparing what may be the final offensive. The region is crammed with refugees, sparking fears of a humanitarian disaster. But with Iran’s and Russia’s aid Damascus almost certainly will reestablish its control, destroying or displacing rebel forces that are now mostly Islamist radicals. At that point, only territories in the north and southeast—which have U.S. bases—lie outside the Assad regime’s control.

U.S. policy has been counterproductive, even irrational, throughout the extended conflict. The Obama administration originally labeled Assad a “reformer.” Then Washington demanded his ouster—reducing the incentive for both him and the opposition to negotiate. As the conflict developed the United States initiated combat operations against the Islamic State while pushing to oust Assad, who fielded the strongest forces opposing ISIS. American aid then went to so-called moderates even as they fell behind more radical groups, often surrendering to the latter.

While targeting ISIS, Washington backed Islamists such as Jabhat al-Nusra, an Al Qaeda affiliate. Washington also sought to work with Turkey’s Erdogan government, even as the latter facilitated Islamic State operations in Syria. America turned to Kurdish forces to lead the ground attack on the Islamic State but refused to defend its allies when Ankara intervened militarily to expel Kurds from their homes near the Turkish-Syrian border. Furthermore, Washington encouraged the involvement of the Gulf States, which underwrote the most radical rebel factions. Although nominally arrayed against ISIS, Washington’s allies largely shifted their militaries away from America’s priority of fighting ISIS to Yemen.

While avoiding direct involvement in Syria’s conflict, the United States launched missile strikes in response to alleged Syrian use of chemical weapons. Yet the vast majority of the conflict’s casualties—with deaths estimated at around a half million—were the result of conventional military action by all sides. Bombs and bullets killed far more people than chemical weapons. Washington, however, preened morally while Syrians still died in by ever-increasing numbers.

Finally, the Obama administration steadily increased U.S. involvement in Syria, a distant conflict with no significant impact on American security, yet while also denouncing both Iran and Russia for intervening in support of their far greater interests. The administration introduced U.S. forces without congressional authorization while Tehran and Moscow, both long allied with Damascus, responded to the Assad government’s request for support.

Overall, U.S. policy was not just a failure, but a disaster. Washington managed to do little more than raise expectations among Assad’s opponents, prolonging the war and increasing its toll. American aid strengthened radical jihadists, which pose a far greater challenge to America than Damascus. Washington’s focus on ISIS allowed the governments most threatened—Syria, Turkey, and the Gulf States—to focus on other enemies (“moderate” insurgents, Kurds, and Yemenis, respectively).

Finally, Washington reinforced its well-earned reputation for being not just careless but irresponsible in attacking countries without considering what was likely to follow. Assad is a tribal leader with strong support, especially from Syrian minorities who saw the consequences of America’s invasion of Iraq and didn’t want a repeat. One Alawite told me that disagreements with Assad ended when the fighting started. The latter was the only defense against “chaos and the jungle.” Washington officials might view that attitude as short-sighted. But somewhere between two hundred thousand and a million people died in the sectarian war unleashed by the U.S. invasion of Iraq. Why would anyone trust America?

It is this record which candidate Trump understandably criticized for good reason.

But President Trump’s Syria policy has turned into that of his predecessor. Although Washington gave up supporting insurgents, there aren’t many left to aid. The Islamic State is largely defeated, but America is unwilling to shift responsibility back to Iraq, Syria, Turkey, Jordan, and the Gulf States, all of which have interests in eradicating ISIS’s final elements. With the Idlib offensive soon to begin, the Trump administration is threatening military action if, but only if, the Assad government uses chemical weapons, a minor factor in the conflict.

Even worse, the administration apparently plans to reinforce the U.S. presence in the southeast near the Iraqi border to pressure Iranian supply lines. And Washington hopes American forces cooperating with Kurdish militias in the north can both inhibit Iranian access to the rest of Syria and force Assad’s ouster by denying the regime access to people and resources, especially oil deposits.

Nor is it obvious why Washington should want to do so. Syria does not threaten the United States, or Israel, which is more than capable of deterring Damascus. Brutal authoritarian governments are unpleasant, but common in the Middle East. Moreover, they are often allied with America (think Egypt, Bahrain, Saudi Arabia, United Arab Emirates, Turkey). Iran is a malign actor but is overstretched, and its alliance with Syria is defensive. Far more aggressive and dangerous is Washington's "friend," Saudi Arabia, which has invaded its neighbor Yemen. Saudi Arabia has used its troops to sustain a minority royal dictatorship in Bahrain, funded anti-Western radicals in Syria, and kidnapped the Lebanese prime minister.

In any case, it is hard to imagine how the administration can succeed. When visiting Syria at the end of August, I traveled widely, including to Homs and Aleppo. The reconstruction process will be painfully slow, but the war in these cities is over. The Assad regime is in firm control. He won't leave because Washington wants him to.

Nor is there any chance that Moscow will oust its ally. Russia has paid heavily to sustain the Assad government; Putin will not risk his gains to please America, absent an unlikely offer of great value, such as lifting sanctions. Additionally, there is little Moscow can do to coerce Syria, other than halt support for military operations—but that won’t force out Assad.

The Russians have even less leverage over Iran, which is in Syria at the invitation of the Assad government. Nor are the Kurds, effectively abandoned by Washington when they were attacked by Turkey, likely to do the Trump administration’s dirty work. They are far more likely to strike a deal with Damascus.

America, with very little at stake in Syria, wants to dictate Syria's future and limit or exclude countries with far greater interests at stake than America has. Washington policymakers are dreaming. Even if their objectives were realistic, the gain wouldn't be worth the effort. Both the Obama and Trump administrations were living in a fantasy world when it came to Syria.

However, the greatest risk from American involvement is the possibility of triggering a military confrontation. For instance, when attacking Washington's Kurdish allies, Turkey threatened to advance on areas containing American personnel. Also, should Washington order attacks on Syrian military units for whatever reason, Russia might respond by either defending its ally or targeting America's regional friends. As a sovereign state, Damascus might be willing to risk a confrontation to reassert its control. Iran, too, might be willing to play a dangerous game of chicken. The greatest danger likely is not an intentional war but accident and miscalculation. Given the dearth of serious American interests at stake in Syria, Washington would be risking much for little.

Syria was always beyond U.S. control. Of course, fans of intervention claim that if only America had done something earlier—criticized someone, supported someone, or attacked someone—the civil war would have ended, and a democratic, pro-Western Syria would have emerged. This reminds one of Ronald Reagan's doomed hopes when intervening in Lebanon's bitter, horrid, confusing civil war. It also echoes the cakewalk promised by proponents of the Iraq invasion. But there are far too many contrary actors with far too many interests involved for Washington to have its way.

Whatever the United States hoped for in 2011 and 2012, that world disappeared long ago. Today the Trump administration looks desperate. It has neither leverage nor influence to change Syria and only hopes to affect events by risking a military confrontation with multiple hostile powers over minimal stakes. Candidate Donald Trump would never have agreed to such a policy. President Donald Trump needs to remember why he ran for president.