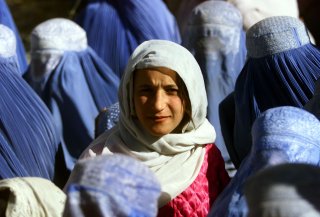 The new Taliban government of Afghanistan proclaimed on Tuesday that it would temporarily adopt a constitution dating from 1964 until a new one could be written.

“The Islamic Emirate will adopt the constitution of the former King Mohammad Zahir Shah’s time for a temporary period,” a statement put out by the new government’s acting Minister of Justice, Mawlavi Abdul Hakim Sharaee, read.

Sharaee added, however, that any portion of the text that conflicted with the group’s principles or interpretation of shari’a law would be removed, potentially weakening the document’s legal protections—including its provision allowing women the right to vote.

The 1964 constitution dates from the rule of Mohammad Zahir Shah, King of Afghanistan from 1933 until 1973. Under Zahir Shah’s rule, Afghanistan remained neutral in broader geopolitical conflicts, enjoying a period of peace, and the constitution established equal rights for women, allowing them to participate in politics, and free and fair elections, which continued in the country for the next nine years.

Zahir Shah was overthrown in 1973 by Mohammad Daoud Khan, his cousin and a general in Afghanistan’s army. Five years later, Khan himself was overthrown and executed in the “Saur Revolution,” a coup launched by the Soviet-backed People’s Democratic Party of Afghanistan. The PDPA established a communist government in Afghanistan, igniting an Islamist insurgent movement that persisted in various forms until the Taliban’s conquest of the country in August.

During this time, Zahir Shah remained alive in exile in Rome; he returned to Afghanistan to participate in the 2002 loya jirga following the U.S. invasion, where he declined to return to the throne and supported the authority of then-President Hamid Karzai. He died of natural causes in 2007.

Rather than restore the 1964 constitution, the post-2001 Afghan government opted to draft a new one, which was approved in 2004. The 2004 constitution explicitly protected women and encouraged their political participation—a stance that the Taliban immediately indicated they would not continue after they captured Kabul on August 15.

While the group promised early on that it would respect women’s rights and form an inclusive caretaker government, when that government was formed, it excluded women and religious minorities and gave all top positions to hardliners. In the weeks since then, women’s schools and other institutions have been closed by the group, and various human rights abuses have been reported.