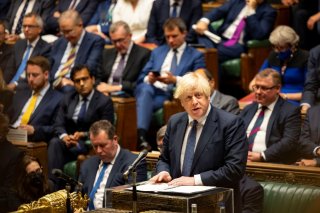 In a Wednesday emergency session convened after the fall of Afghanistan, British lawmakers condemned U.S. President Joe Biden and British Prime Minister Boris Johnson for their roles in Afghanistan’s fall to the Taliban militant group.

The parliamentarians described the two leaders’ failure to intervene and protect the Afghan government from imminent collapse as an intelligence failure and neglect of moral duty. The criticism came from all corners of the government, in particular, from many members of the Conservative Party, which Johnson leads, as well as Labour, Liberal Democrat, and Scottish National Party Members of Parliament (MPs).

Johnson, who was present at the emergency session, emphasized that the emerging Taliban government would be judged by the Western world on their actions rather than their words, noting that the group’s commitment to nonviolence and reconciliation had come at the same time as the group continued its executions outside Kabul and its narcotics trade in the country’s south.

However, Johnson’s speech was received skeptically, with heckling and interruption from the chamber. Sir Keir Starmer, the head of the Labour Party and the official leader of the opposition, described Johnson’s leadership during the crisis as “careless” and accused the British government of “staggering complacency” in assuming that the Kabul administration was ready to defend itself.

Theresa May, who was Johnson’s predecessor as prime minister and continues to serve as an MP, asked why the government had miscalculated the strength of the Taliban and the Afghan government without external support.

Criticism was also directed at Biden, who instigated the U.S. and NATO withdrawal and consistently refused to return troops to the country throughout the government’s collapse. Johnson argued that Britain was forced to withdraw its troops after Biden committed to the U.S. departure.

The U.S. maintained the lion’s share of international forces in the country throughout the war

Conservative MP Tom Tugendhat also took issue with Biden’s derision of the Afghan National Army, noting his own service in Afghanistan and the sacrifices made by Afghan forces in fighting back the Taliban and criticizing Biden for attacking their courage while not having served in the military himself.

Johnson also outlined Britain’s program of resettling Afghan refugees and translators, suggesting that it would welcome 5,000 Afghans in the first year and 20,000 within five years. This plan was also criticized by MPs on the basis that the remaining 15,000 would be put in grave danger by being forced to remain in the country under Taliban rule for years prior to leaving for Britain.