Trump Takes A Victory Lap, But Will It Be Short-Lived? 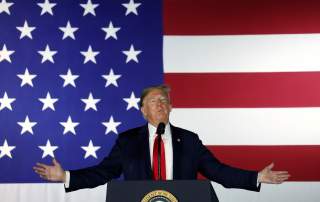 President Donald Trump said Wednesday that “the American people should be extremely grateful and happy” that no Americans were harmed in a massive Iranian ballistic missile attack against U.S. forces in Iraq on Tuesday night.

The Trump administration had promised to restrain the Iranian government’s behavior across the Middle East by replacing Obama-era diplomatic accords with a campaign of “maximum pressure.” The assassination of Maj. Gen. Qassim Suleimani was the apex of confronting Iran. But the Iranian retaliation, both careful and humiliating, left Iran hawks in the administration silent, while Trump declared victory.

“Iran appears to be standing down,” Trump said from the White House on Wednesday morning. “Nations have long tolerated Iran’s destructive and destabilizing behavior in the region and beyond. Those days are over.”

Proponents of maximum pressure close to the president were either silent, or counselling caution.

Secretary of State Mike Pompeo, who had reportedly lobbied Trump for months to kill Suleimani, was silent after the Iranian ballistic missile attack.

The only statement from his Department of State on the missile strike was a brief summary of a phone call with Iraqi Kurdish president Masrour Barzani.

In fact, an op-ed published Wednesday morning in the Washington Times by Clifford May, founder of the hawkish Foundation for the Defense of Democracies, simply did not mention the Iranian missile strike. “Iran’s ruler misjudges the president and loses his leading terrorist,” May wrote, referring to Suleimani.

Senate Foreign Relations Committee chairman Sen. Jim Risch (R–Idaho) had praised the decision to kill Suleimani, but on Wednesday he applauded Trump “for deescalating the situation and putting us back on the path of diplomacy” in an official statement.

Sen. Lindsey Graham (R–S.C.) had called for attacks on Iranian oil refineries as a consequence for any Iranian “retaliation.” But the morning after the strike, Graham wrote that “retaliation for the sake of retaliation is not necessary at this time,” and followed up with another statement calling for renewed economic pressure.

Trump did promise in his speech to impose new economic sanctions “until Iran changes its behavior,” a hallmark of the maximum pressure campaign. It was unclear how much more damage the Trump administration could do to the Iranian economy, however.

“The U.S. has sanctioned itself out of business,” said Middle East Institute fellow Alex Vatanka during a Wednesday afternoon conference call. “I don’t see how many more sanctions you can impose.”

Whatever form the sanctions will take, Trump’s speech seemed to signal the end of military escalation.

Iranian forces launched over a dozen surface-to-surface missiles from inside Iran at Ain Al-Asad air base and a military facility in Erbil on Tuesday night, according to statements by both the U.S. Department of Defense and the Revolutionary Guards of Iran. Iraq’s interim prime minister Adil Abdul-Mahdi said that Iran had warned him of the attack, which likely allowed United States and Iraqi forces to take shelter before the weapons struck.

“Iran took & concluded proportionate measures in self-defense,” Iran’s Foreign Minister Mohammad Javad Zarif announced on social media shortly after. “We do not seek escalation or war, but will defend ourselves against any aggression.”

Zarif alluded to the role Ain Al-Asad air base played in the January 3 assassination of Suleimani on the road to Baghdad International Airport. The official Revolutionary Guards statement announcing the missile attack called it “revenge for the assassination of the glorious, self-sacrificing, heroic commander Hajji [pilgrim] Qassim Suleimani.”

U.S. forces had killed Suleimani, along with several high-level Iraqi paramilitary officials, in the wake of deadly clashes between Iranian-backed militias and U.S. forces in Iraq. U.S. military leaders said that Suleimani posed an “imminent” threat to U.S. forces, although members of Congress have disputed the justification.

Zarif and Abdul-Mahdi both claimed that Suleimani was in Iraq on a diplomatic mission, an allegation that Pompeo denied.

Trump threatened to bomb fifty-two sites inside Iran in response to any Iranian attack in a statement posted to social media on January 4. And the State Department touted the assassination of Suleimani as a successful part of maximum pressure. Only the U.S. military urged de-escalation.

“The strategy and the maximum pressure campaign that we’ve had in place—it has a diplomatic component, it has had an economic component, and it has had a military component,” Pompeo told reporters on Tuesday morning, adding that the strike against the Iranian general “was decisive, serious, and messaged Iran about the constraints that we are going to place on that regime so that it doesn’t continue to put American lives at risk.”

“There’s a big off-ramp sitting in front of Tehran right now,” the military leader told reporters on Tuesday afternoon. “That is to de-escalate, to message us that they want to sit down and talk—without precondition, by the way—to the United States about a better way forward.”

The Trump administration had previously extended the same offer to Iran, although Iranian diplomats have made it clear that they do not take calls for negotiations seriously while maximum pressure continues.

After the strike, Trump called on France, Britain, Germany, Russia and China to leave the Joint Comprehensive Plan of Action, an Obama-era deal to lift economic sanctions on Iran in exchange for international inspections and regulations on the Iranian nuclear program. Iran has called maximum pressure a violation of the deal, and ramped up its nuclear activities in response.

But the president also said that “we must all work together toward making a deal with Iran that makes the world a safer and more peaceful place.”

Randa Slim, director of the Initiative for Track II Dialogues at the Middle East Institute, noted that Iran has been asking for such “P5+1” negotiations involving the six world powers all along.

“This is the one process, the one framework [Iran has] said is the one way they can go back to discuss the file,” she said. “I found this line in the speech as something that, one, will be picked up positively by Tehran, because that has been their demand, and two, it’s something that maybe there are creative solutions around this.”

“The Europeans in particular, but also the Chinese and Russians, can come together with Trump on a way forward,” Slim concluded.