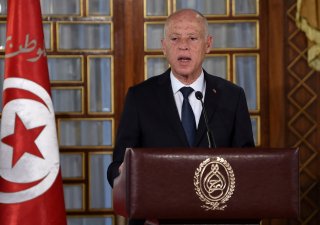 Tunisian president Kais Saied announced on Wednesday that the country’s parliament, which he had extralegally suspended in July 2021, had been formally dissolved.

“Today, at this historic moment, I announce the dissolution of the Assembly of Representatives of the people,” Saied declared on Tunisia’s government television network. The Tunisian leader claimed that the decision had been necessary “to preserve the state and its institutions.”

Saied’s move, which sealed the Tunisian parliament’s fate nine months after its controversial suspension, came hours after members of the body met in a virtual session and announced that they had voted against his decree suspending parliament and declaring a state of emergency, insisting that it be revoked.

The president condemned the parliament’s vote, describing it as an illegal “coup attempt” and declaring that it was not legally binding due to the parliament’s suspension. After the vote had taken place, Tunisian justice minister Leila Jeffal asked the country’s attorney general to investigate the members involved in the vote on charges of “conspiring against state security,” according to Al Jazeera.

Saied, a former constitutional law professor elected president on an anti-corruption platform in 2019, issued a series of controversial presidential orders in July. He suspended parliament, limited the independence of the country’s judiciary, and effectively gave himself the power to rule by decree.

Saied’s political opponents—including Ennahda, the Islamist party that led Tunisia’s parliament prior to its suspension—condemned Saied’s moves as illegal and claimed that he was attempting to restore autocratic rule to the country. Conversely, Saied’s supporters have described his actions as necessary to prevent government corruption and revitalize the country’s stalled economy. The president has maintained the backing of the Tunisian armed forces, and opinion polling suggests that he remains broadly popular within the country.

Following the self-immolation and death of Tunisian fruit vendor Mohamed Bouazizi, weeks of anti-government demonstrations against longtime Tunisian dictator Zine el-Abidine Ben Ali resulted in his resignation and exile on January 14, 2011. Ben Ali’s overthrow spawned the “Arab Spring,” a wave of similar protests throughout the region, including in neighboring Egypt, where dictator Hosni Mubarak was also removed from power. After Egypt returned to military rule in 2013 and neighboring Libya and Syria descended into sectarian civil wars, Tunisia maintained its new democratic institutions, and a group of pro-democracy organizations was awarded the Nobel Peace Prize in 2015.